A month of ups and downs literally. I’ve really enjoyed racing this month as I have been travelling all over. I competed in two triathlons and enjoyed a short training camp with the Triathlon England Talent Squad. <strong>

Billed as the biggest triathlon in Europe. The first race I had this month was the AJ Bell London triathlon which was also the qualifier for the World Junior Championships and would run alongside the Grand Final of the World ITU Series to be held on the Gold Coast, Australia. The race would take place at the Excel exhibition centre in London. The event took advantage of the large exhibition halls and included an indoor transition and finish area. Due to road closures for the race I had the delights of experiencing London public transport with my bike. Its worth noting that not all stations allow bikes to embark. So through a combination of catching tubes and walking we eventually arrived at the Excel from Whitechapel. 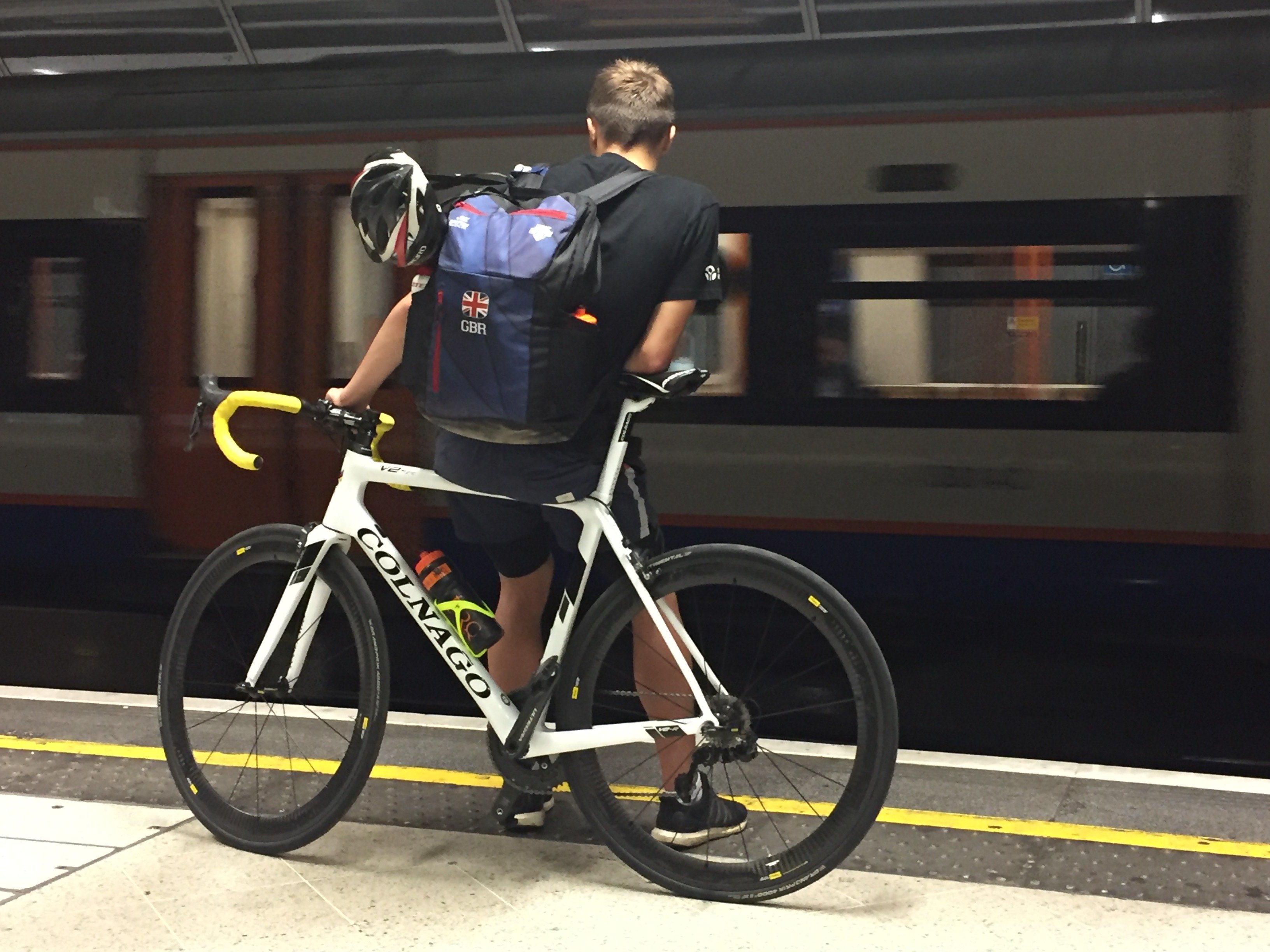 The stakes for this race were really high with the first three qualifying for the World Championships, and this reflected in the quality of the field. Britains top Junior triathletes were all in attendance and there was potentially eight athletes realistically capable of qualifying so it was all up for grabs. Speaking to my Dad and as a first year Junior getting in the top 5 would realistically be a good result for me.The start would be a deep water start and a non wetsuit swim. Once again my swimming didn't let me down and I took the lead passing the first buoy leading the swim for around 600m of the 750m course. I exited the water in first place. 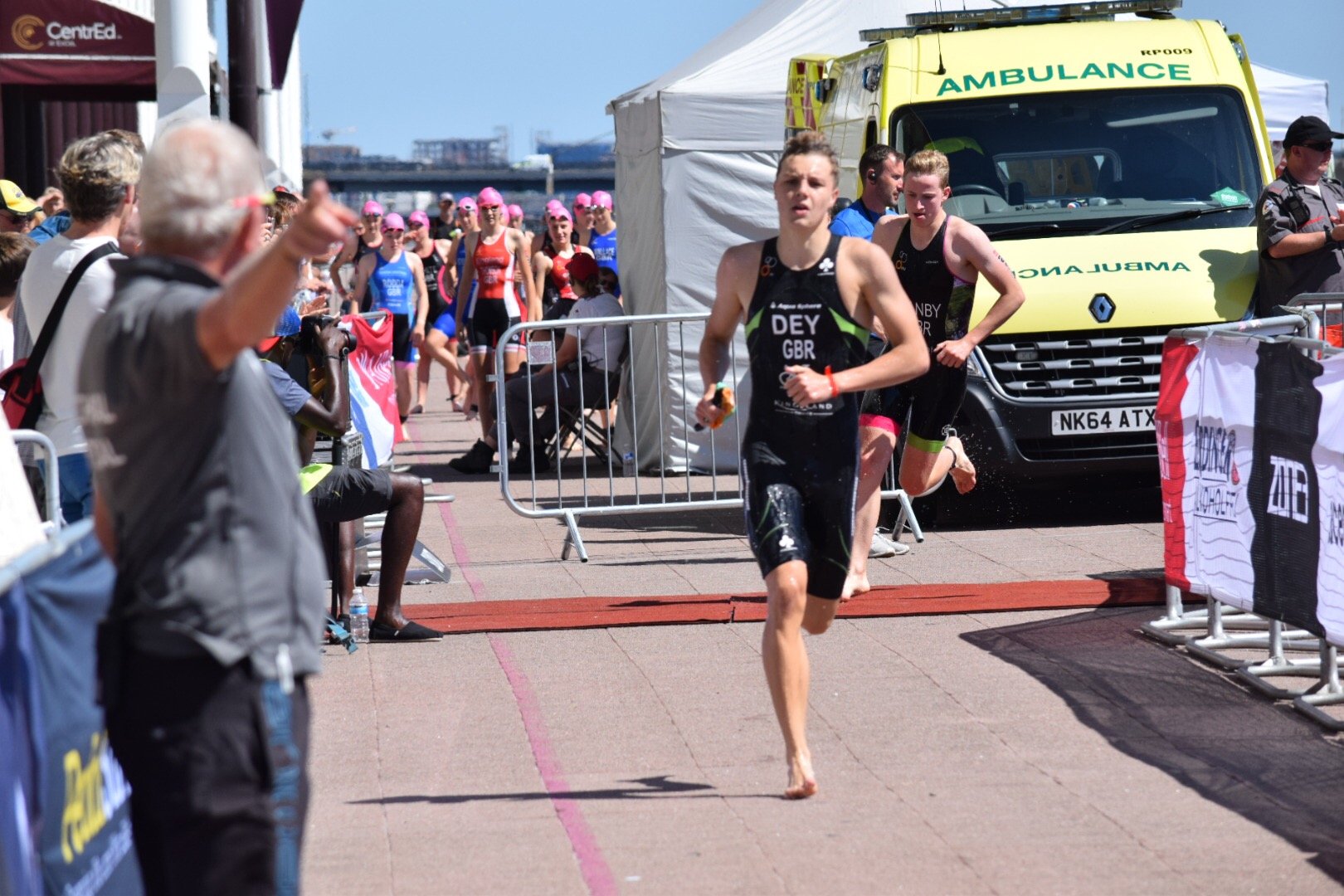 After a long run to my bike I had a speedy transition and got out onto the 20km bike course maintaining the lead. 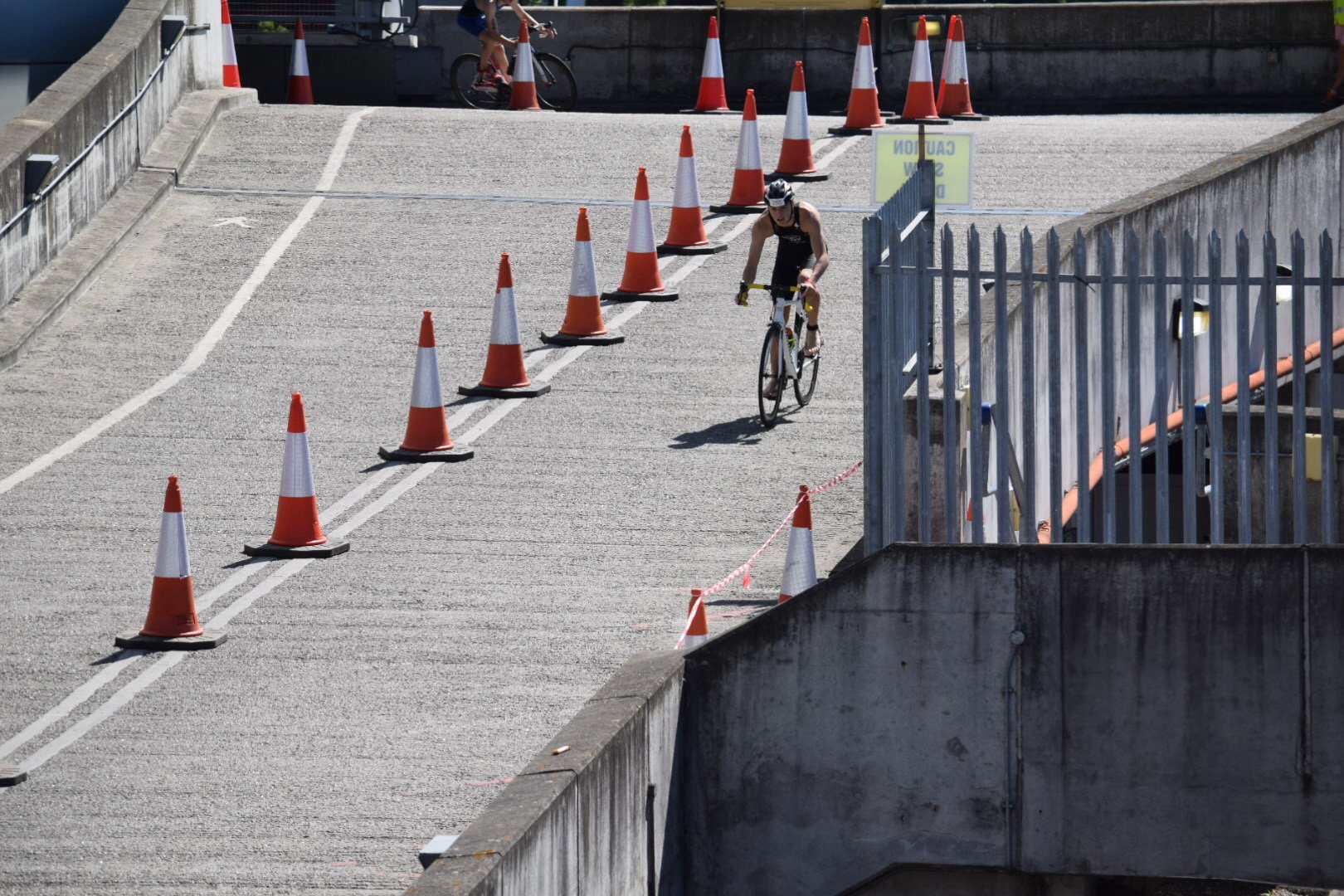 A front pack quickly formed as 5 riders. We worked well and managed to gain 35 seconds on the large chasing pack. 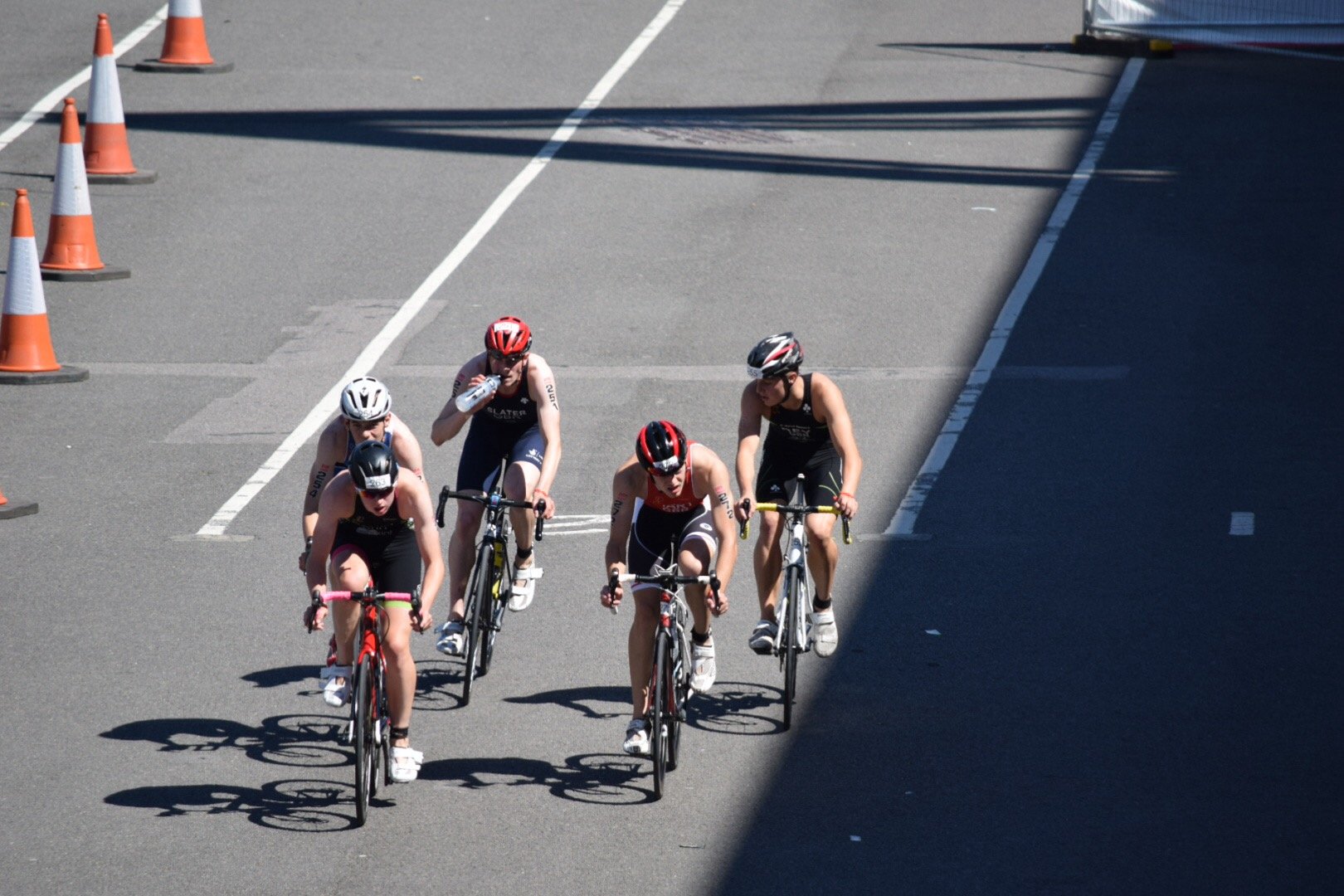 I didn’t have the best T2, which left me in 3rd place coming out of transition going into the run. It was a tough run in the heat and after the first 2.5k lap one athlete from the chasing pack came past me who had the fastest run split by over minute and went on to win it. 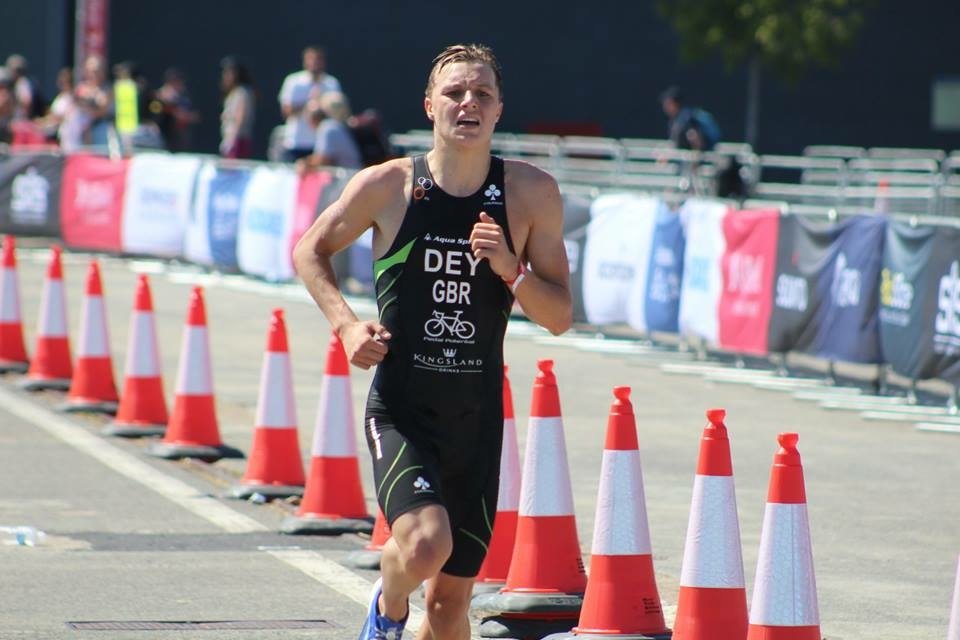 At this point I was in fourth and I managed to make up a little bit of time on the athlete in front of me but couldn’t quite catch him coming into the finish meaning I finished in fourth just 6 seconds behind 3rd. 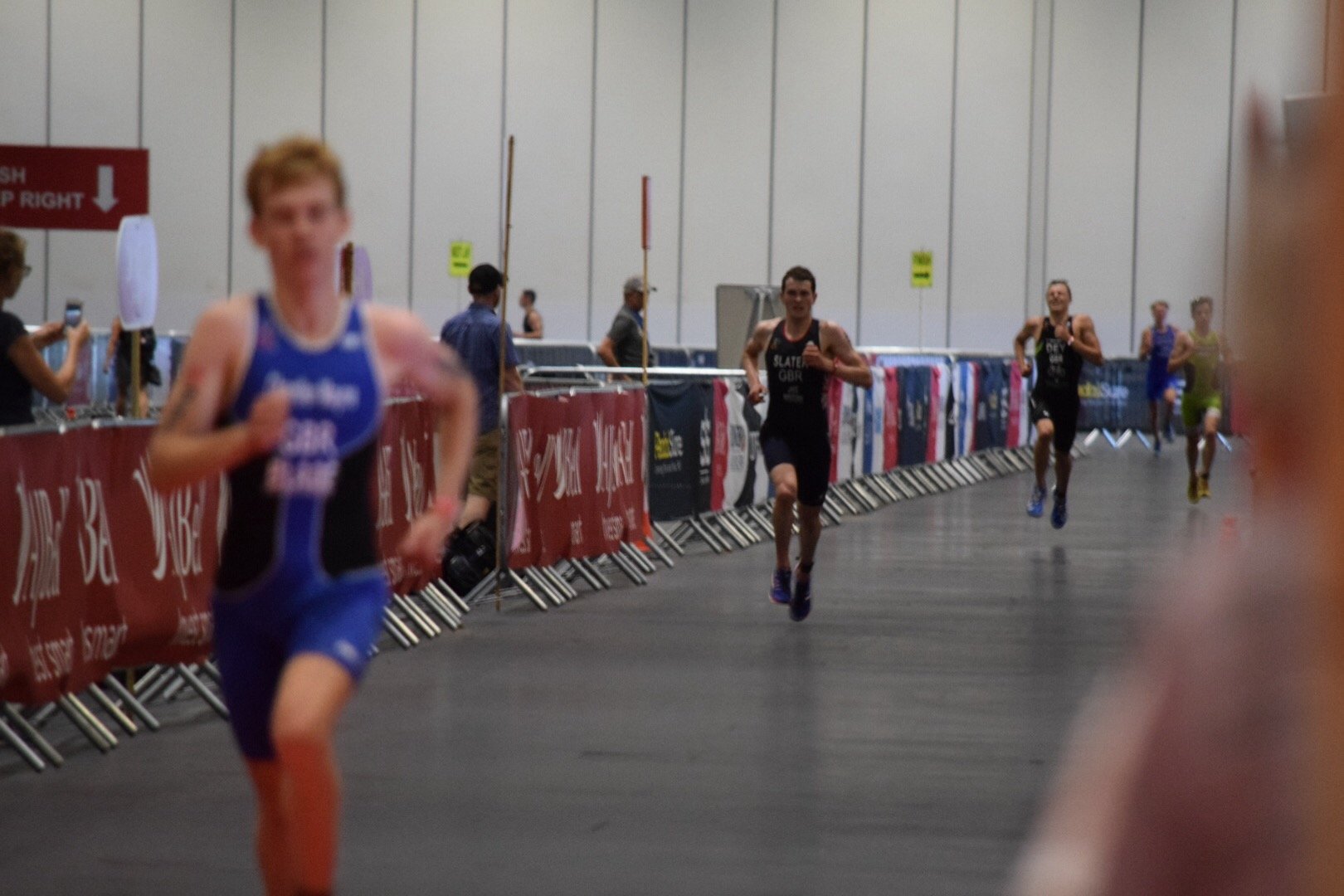 The top three were selected to compete in the World Junior championships, and only 14 seconds separated 2nd and 4th. I was delighted to come top 4 but once the dust had settled, slightly deflated that I had just missed out qualifying for the World Championships. That said a strong team is going to the World Championships and Im sure they will do well, and on reflection this has been motivation for me to do better next year.

Straight after the event I packed my bike in its bike box and along with the rest of the Triathlon England Talent Squad we travelled to Ipswich for a training camp. We had a solid 4 days of training before we packed our bikes again to catch a flight to Riga, Latvia for my first Junior European Cup race. The governing body in Europe, the European Triathlon Union (ETU) organise a series throughout the season. The series is an event open to European Junior triathletes. You get a start by applying to your countries governing body in my case British Triathlon, and depending on how many places they are allocated by the ETU they will award places to individuals based on their performances and current British ranking. This was a race I had planned to attend when I was planning my season and saw it as a good race for my ongoing development. It would also give me another opportunity to race in Europe and see the other European competition. We had a few days to get used to the climate and to rest up for the race. 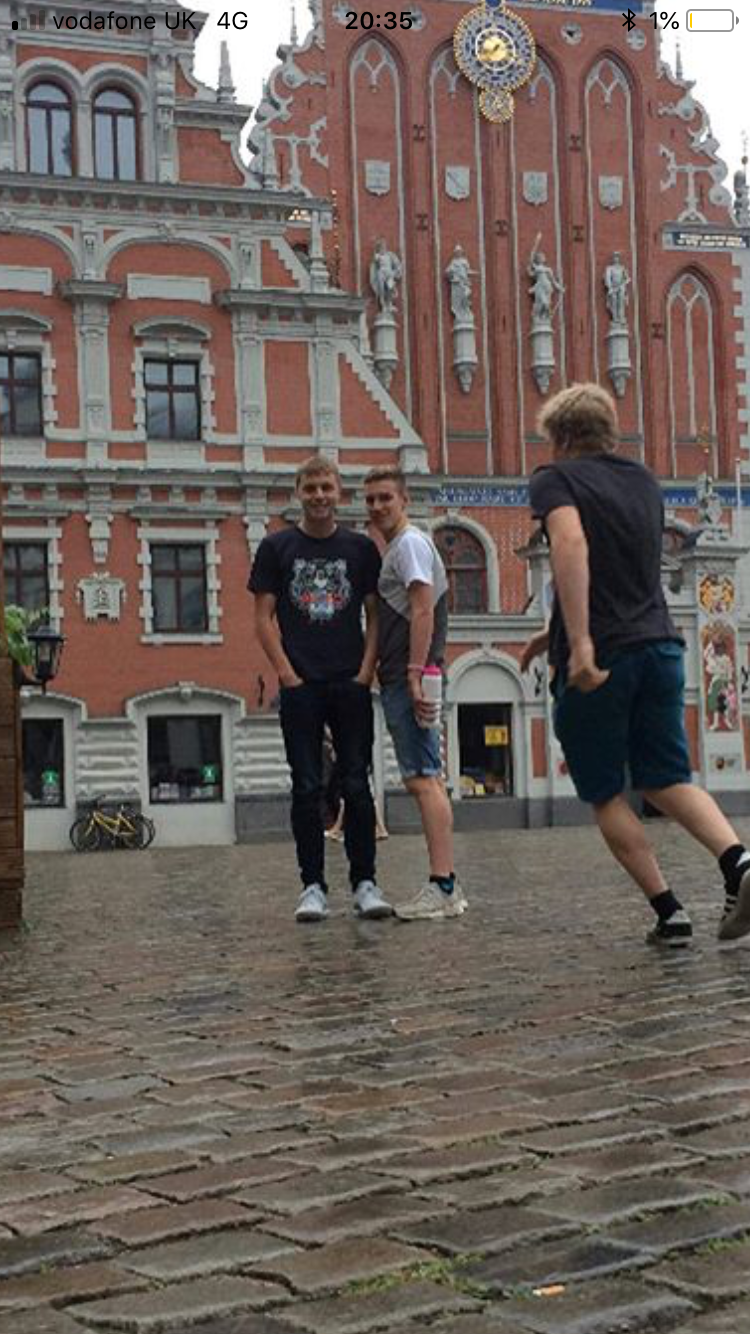 Collecting my race pack I found I was number 7 so that meant I had a very good pick for a spot on the pontoon. The days leading up to the start of the race had been fantastic and the water temperature was over 20'C meaning once again it would be a non wetsuit swim. However just before the start of the race the heavens opened and the temperature dropped and it felt absolutely freezing. The heavy rain didn't dampen my spirits and I felt up beat about the whole thing. Being from Manchester you kind of get use to the damp. 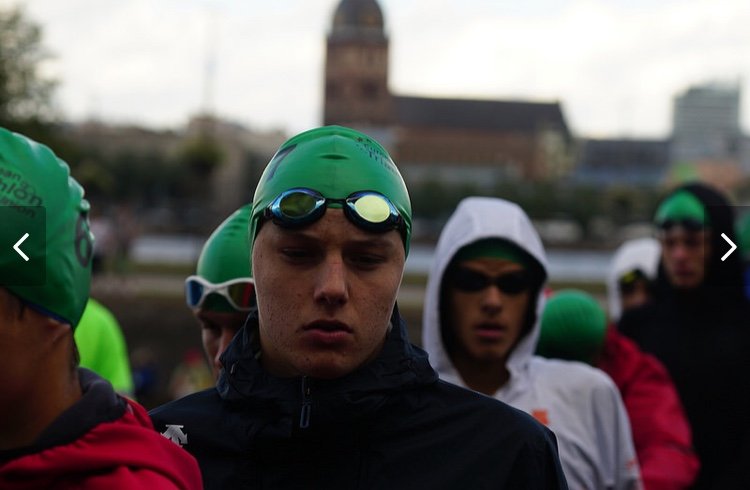 Once again I got off to a strong start and lead the swim from start to finish. I had a good transition and lead out the bike bringing on other British athlete with me. After a short while another 4 athletes bridged up to us making the front group 6 strong. 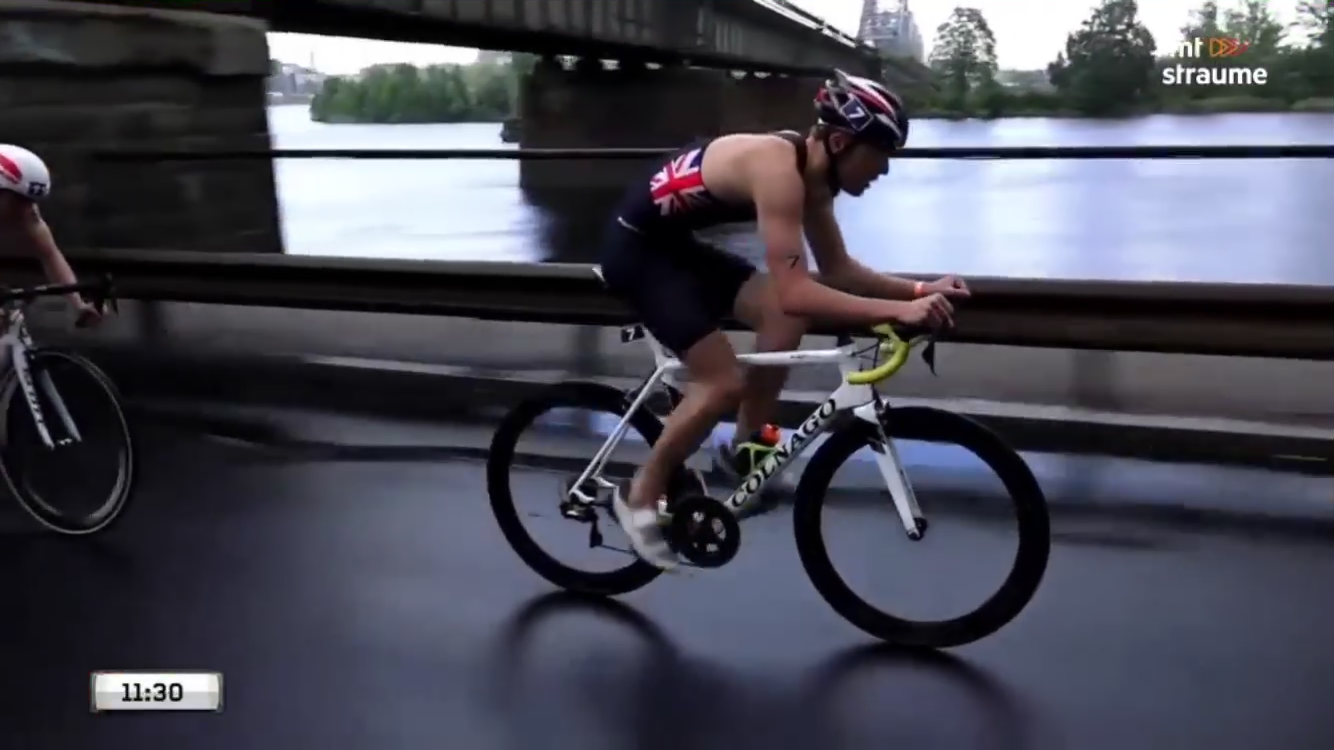 At a corner on the first lap there was a zebra crossing just before it. When it is raining white lines become really slippy and it is easy to lose traction with your tyres. Because of this I unfortunately came off however I got back up and carried on. 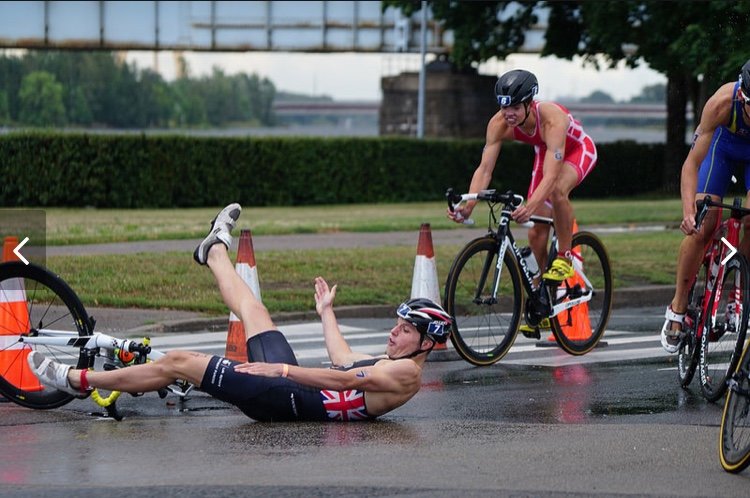 I was then collected by the chasing pack a lap later. I made a couple of attacks in an attempt to give me a better chance to catch some people from the front pack on the run but they were brought back. I then had a strong run to finish in 7th place. Despite the set back of me crashing I was happy with my performance.

Next month I will competing in the final race of the British Junior Super Series at Mallory Park and at the end of September I go to Jersey for the inaugural Junior SuperLeague race. I'm really excited about this I will share the stage with the best triathletes in the world, (Brownlee's, Mola, Murray, Schoeman etc.) who will be in the elite races. I'll tell you all about it in next months blog.