Apologies for the late blog but August has been a total contrast to last month, and I have barely had time to catch my breath. I have pretty much been away from home for the best part of it, either racing or on training camp.

The start of the month saw me traveling down to Parc Bryn Bach, South Wales to race in the Junior World Championship Qualifying race. The qualifying race not only had Juniors racing with us but also Britains best Under 23s, who had their own race to qualify for. My aim for the race was simply to qualify and it would be the first two Junior athletes who would gain automatic selection for the World Junior Championships, which would take place at the World ITU Triathlon Championships Grand Final in Lausanne, Switzerland at the end of August.

In the 2018 Junior World Championship Qualifier in London I was disappointed as I just missed out on automatic qualification for the World Championships, Gold Coast, Australia (I came 4th and they took the first three). This year I didn't want the same thing to happen.

The days leading up to the event the weather had been really warm, which meant that the water temperature had risen to 22'C. At this temperature and as per the rules the race would become a none wetsuit swim.

At the start, I didn’t get a convincing lead however, I still managed to beat everyone to the first buoy. 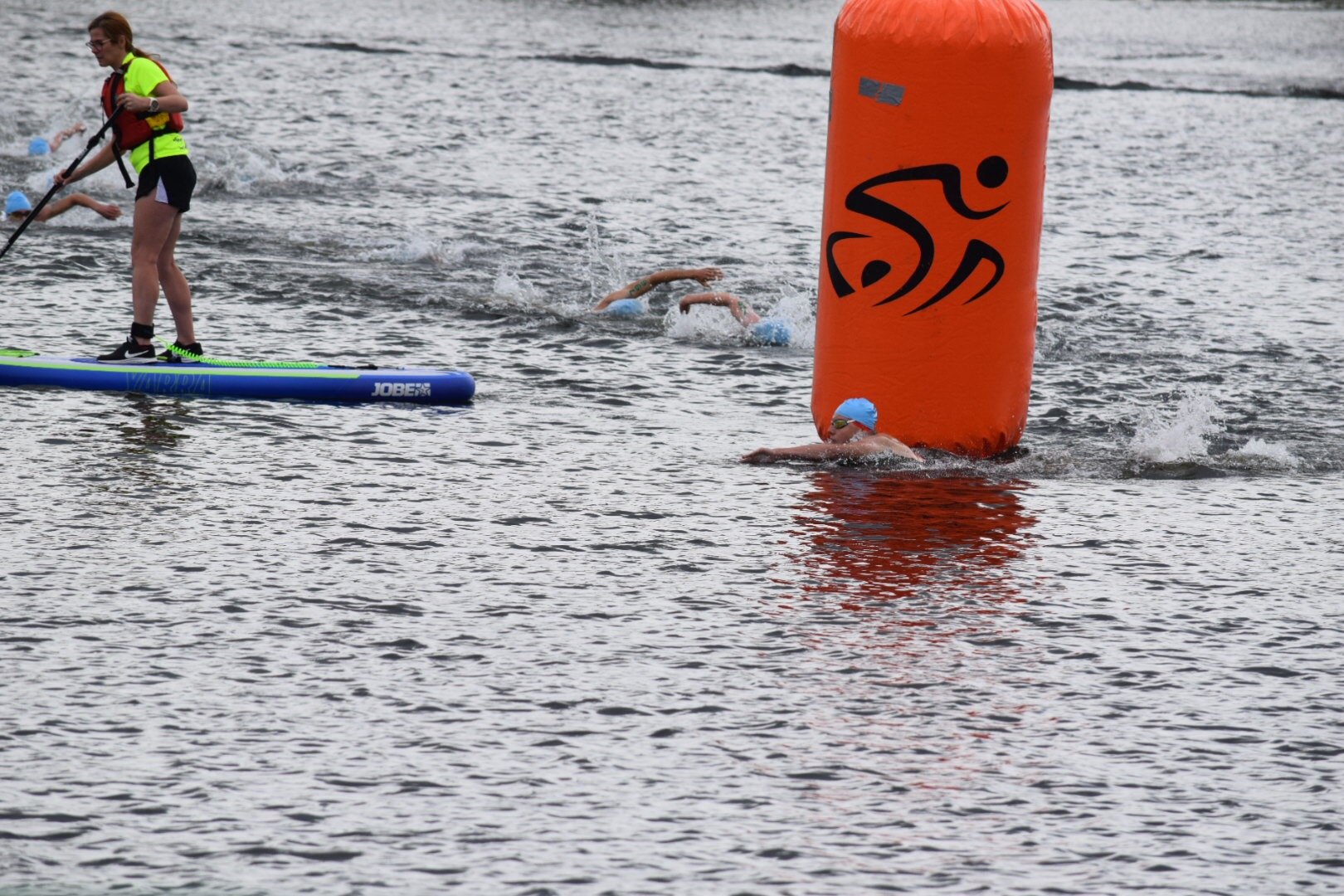 After that point I started to gain a lead on the rest of the field and ended up leading out of the swim with a gap of 12 seconds to the next athlete out. 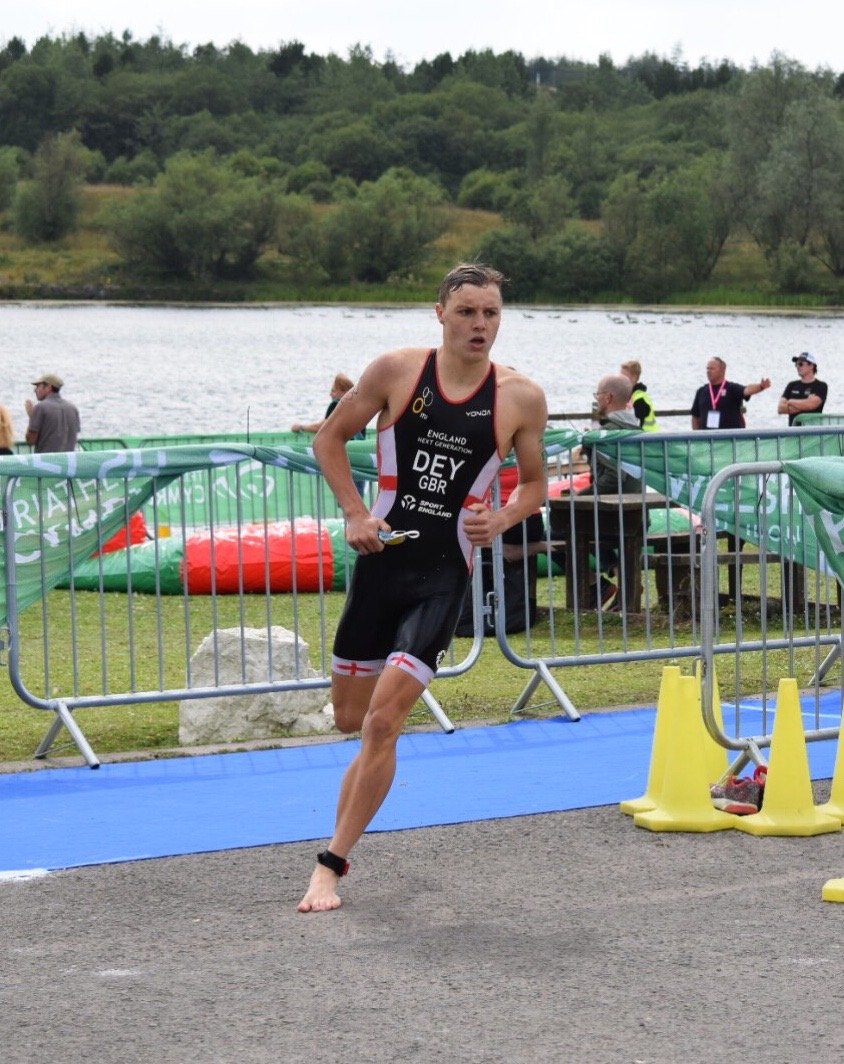 This meant that I didn’t have to rush in transition and I got onto the bike with a comfortable lead. As I embarked onto my first of 5 laps of a hilly bike course, I was waiting for a few people to catch up so that we could work together. 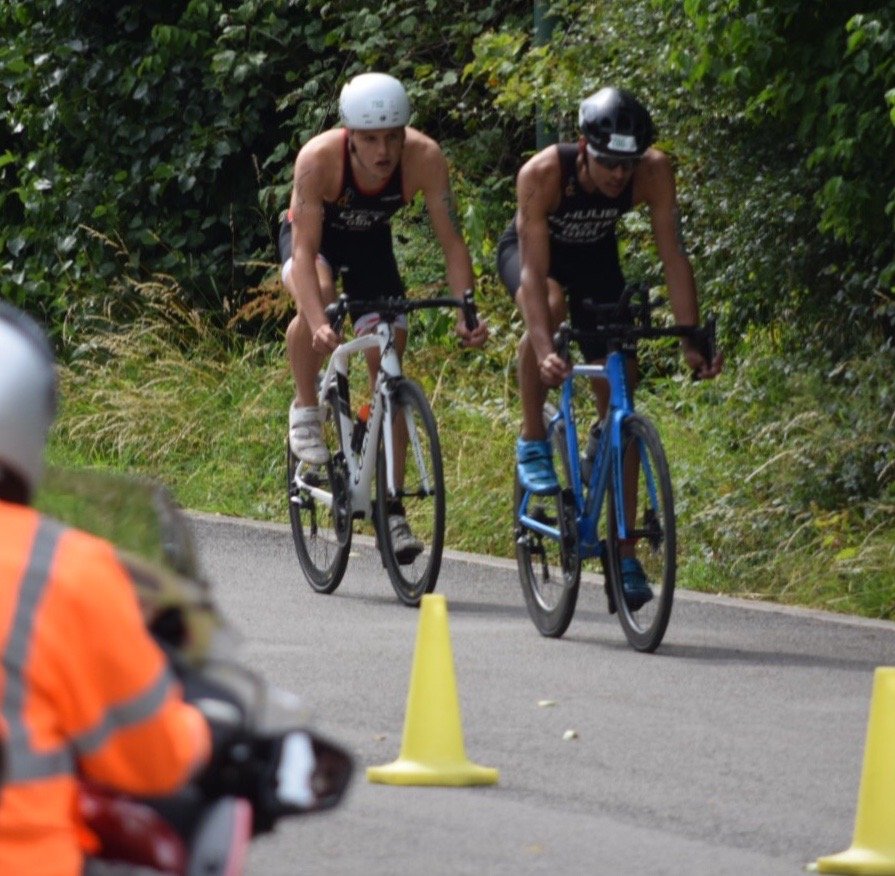 It took the group behind around two laps to catch up. A group of around 12 athletes including me were now leading the race. The roads weren’t very wide meaning a few athletes ended up crashing or getting dropped leaving just one other junior left in the group. 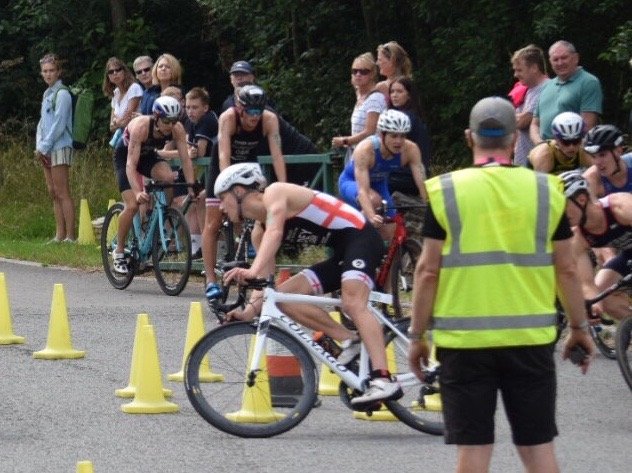 Just before we arrived in T2, I took my feet out of my cycling shoes whilst I was in the middle of the group, and went off the front to get myself a nice 3 second lead going into the run. I went off hard at the start of the run to try and break up the field even more. 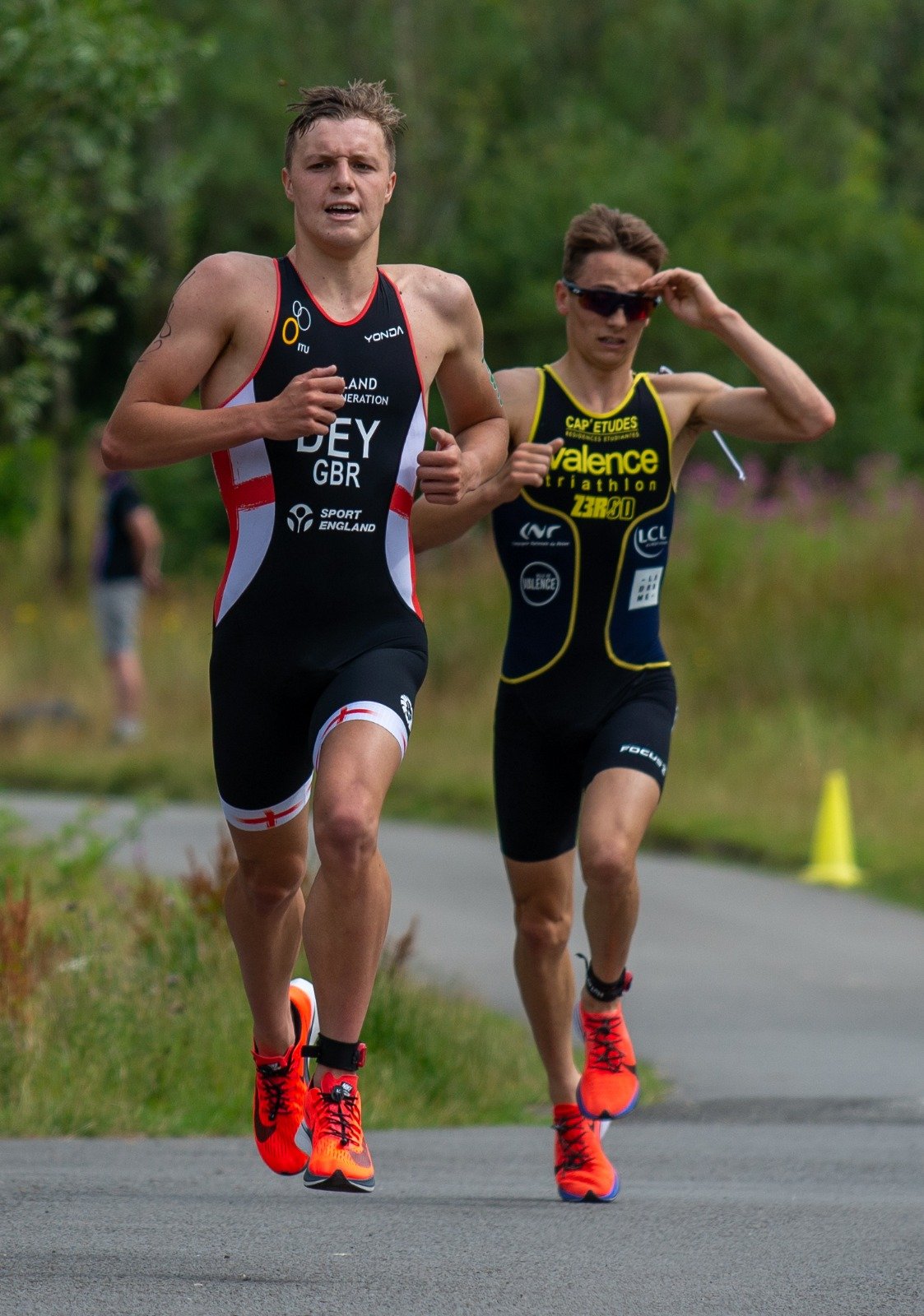 A few seniors ended up passing me and after not having my finest run I ended up finishing in 5th place over all and 1st junior to cross the line gaining me automatic qualification for the world Junior championships. 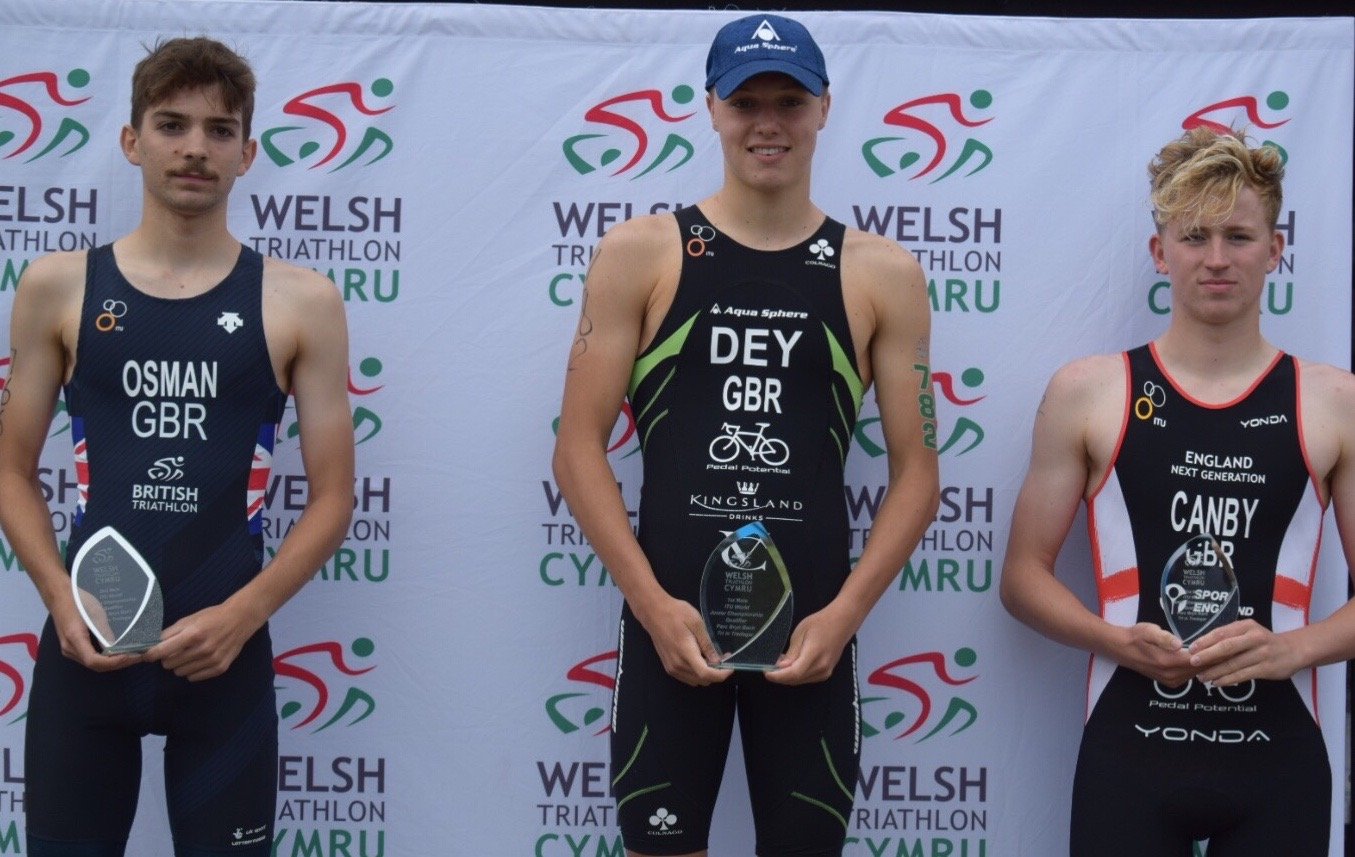 Taking the win ensured I had secured selection for the World Championships and as such I was invited to spend a week at Loughborough University for a World Championship Preparation Training Camp with the GB team. It was great opportunity to get in some really good training a few weeks out from World Championships and to train with and get to know the U23 and some of the Elite GB Triathletes. Before we headed out to Switzerland.

We travelled out to Lausanne for the World Championships three days before the Championships were due to start. This was in order for us to adjust slightly to the hour time difference in Switzerland, to acclimatise to the weather, and to rest up from the journey.

The check in went fine, however we were soon informed our flight had been delayed and we spent 3 hours in the departure lounge waiting for the flight. We eventually got there, a fair bit later than we anticipated. The knock on effect was the post flight run I was hoping for was cancelled, so we built our bikes ready for the next day.

The few days we had leading up to the race allowed for some final preparation sessions in the beautiful mountainous scenery of Switzerland. In them three days Lausanne became very busy with triathletes from countries all around the world descended onto the small town. 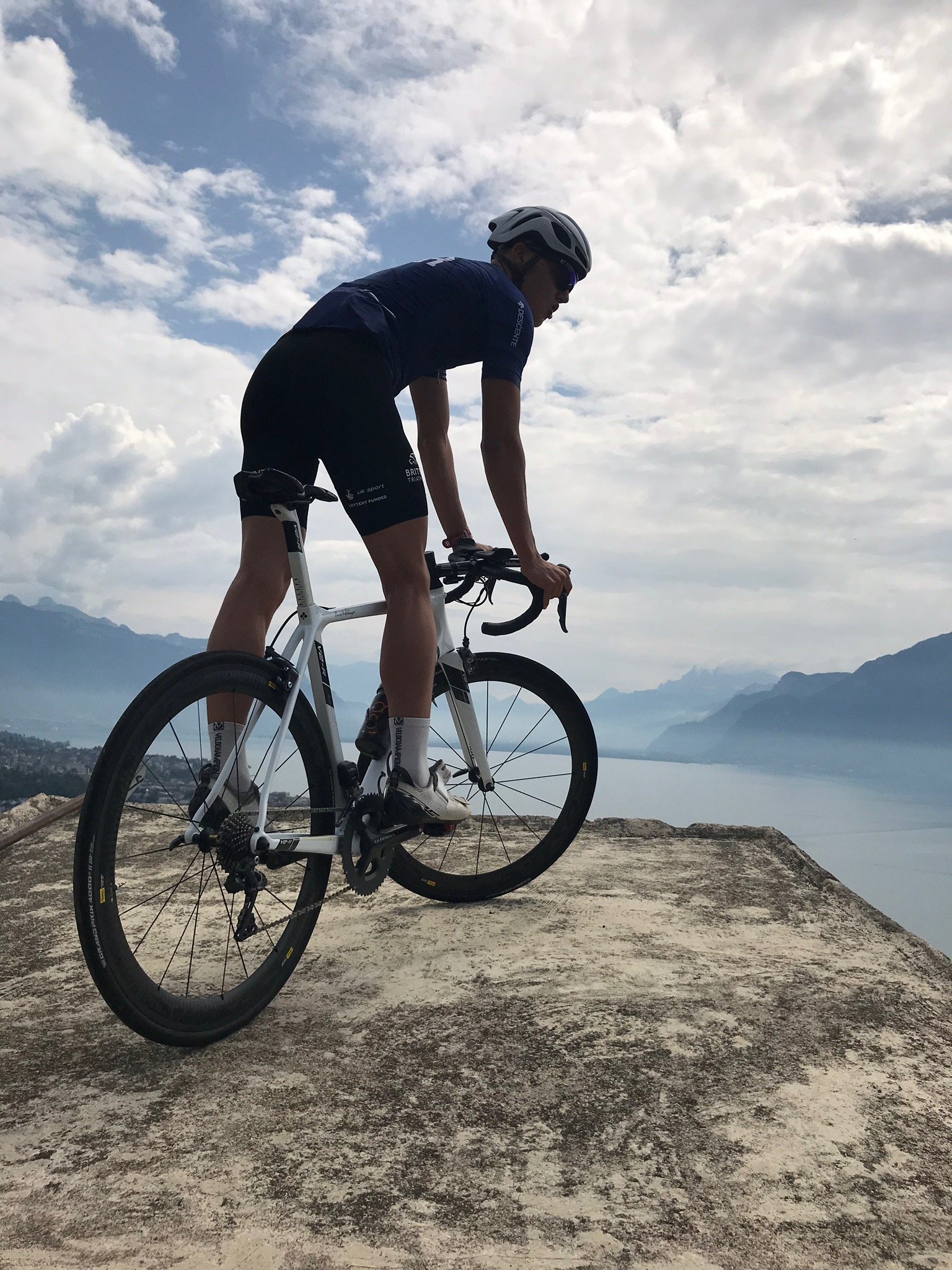 There was a really good atmosphere within the GB camp. All the Juniors, U23’s and Senior Elites and support staff were all staying in the same hotel. Because we were together a lot of the time it allowed me to get to know the older GB athletes better. We took our meals together, went on rides together and generally prepped together for our own respective races. Just being around them was good. 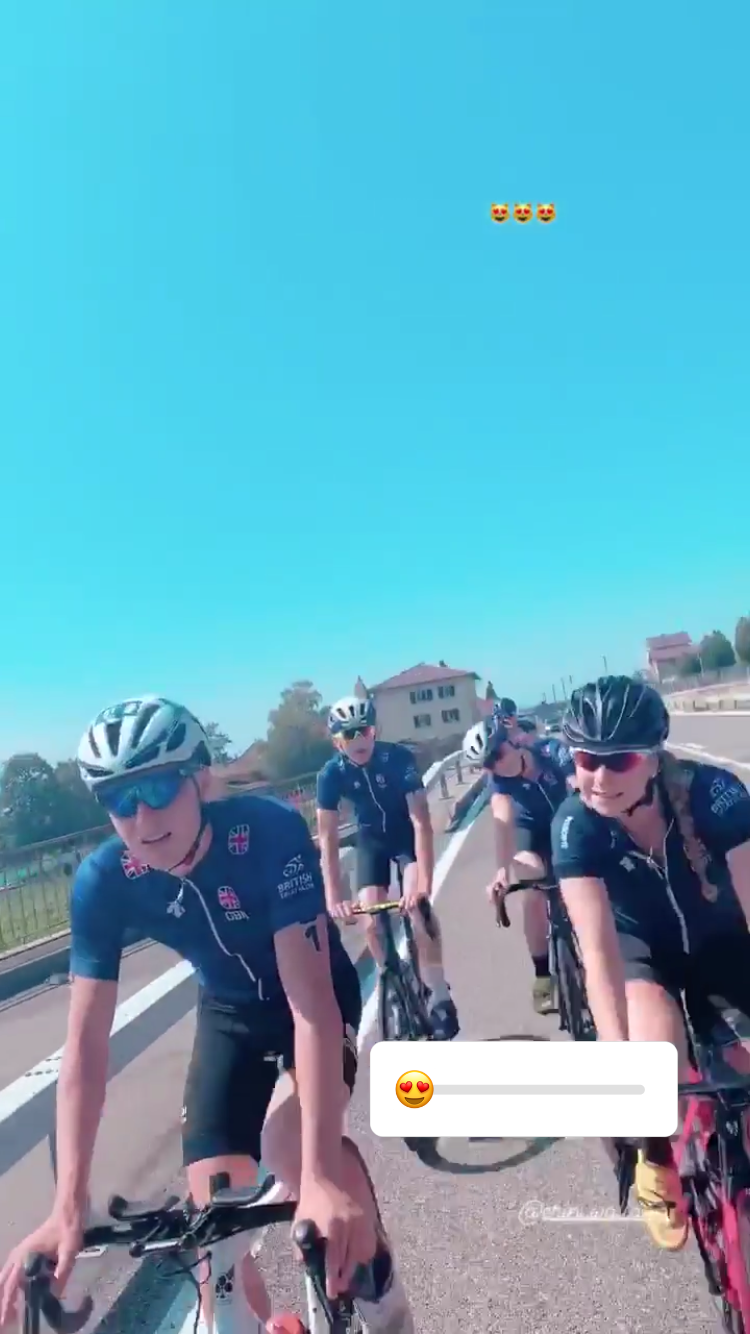 On race day we awoke to a glorious summers day in Switzerland. Our race was scheduled for 1000hrs. The indicators were it was going to be hot. We cycled down to the athlete lounge where we had all of our equipment checked and prepared to race. 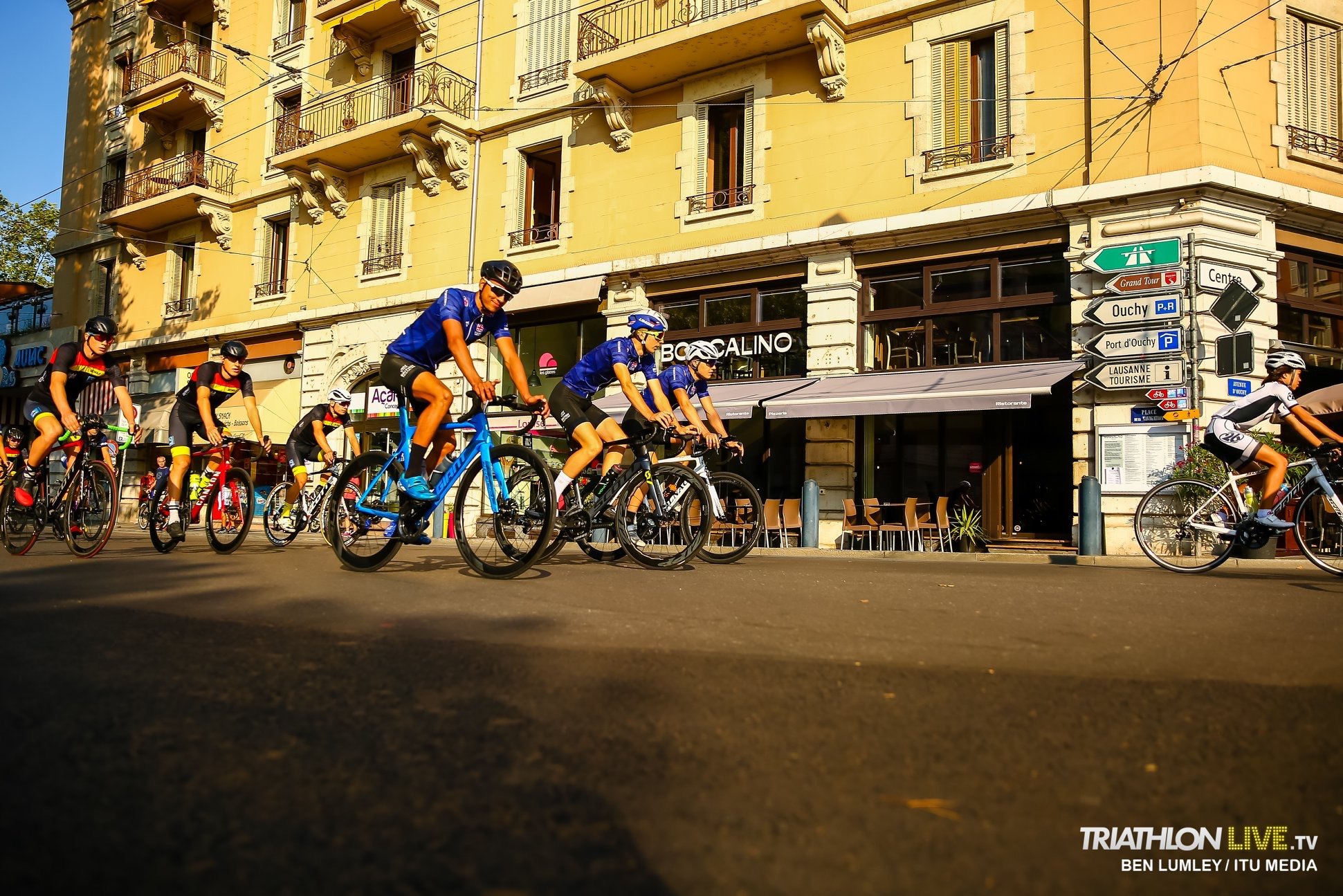 Lake Geneva had a water temperature over 22'C which allowed for a none wet suit swim. The water was crystal clear. At Junior level, the start numbers are nearly random. The lower your number means you get a better pick on the pontoon for the start, however as I was number 61, I didn’t have much choice. I opted for the middle of the pontoon. the deciding factor was the fact I put myself between the two smallest athletes I could find in this case two Chinese Junior athletes who were about 5ft 6'. My choice paid off because I pretty much got a body length start from the pontoon dive and lead the field from the gun, all the way through the swim and with an Italian lead the field out of the water. 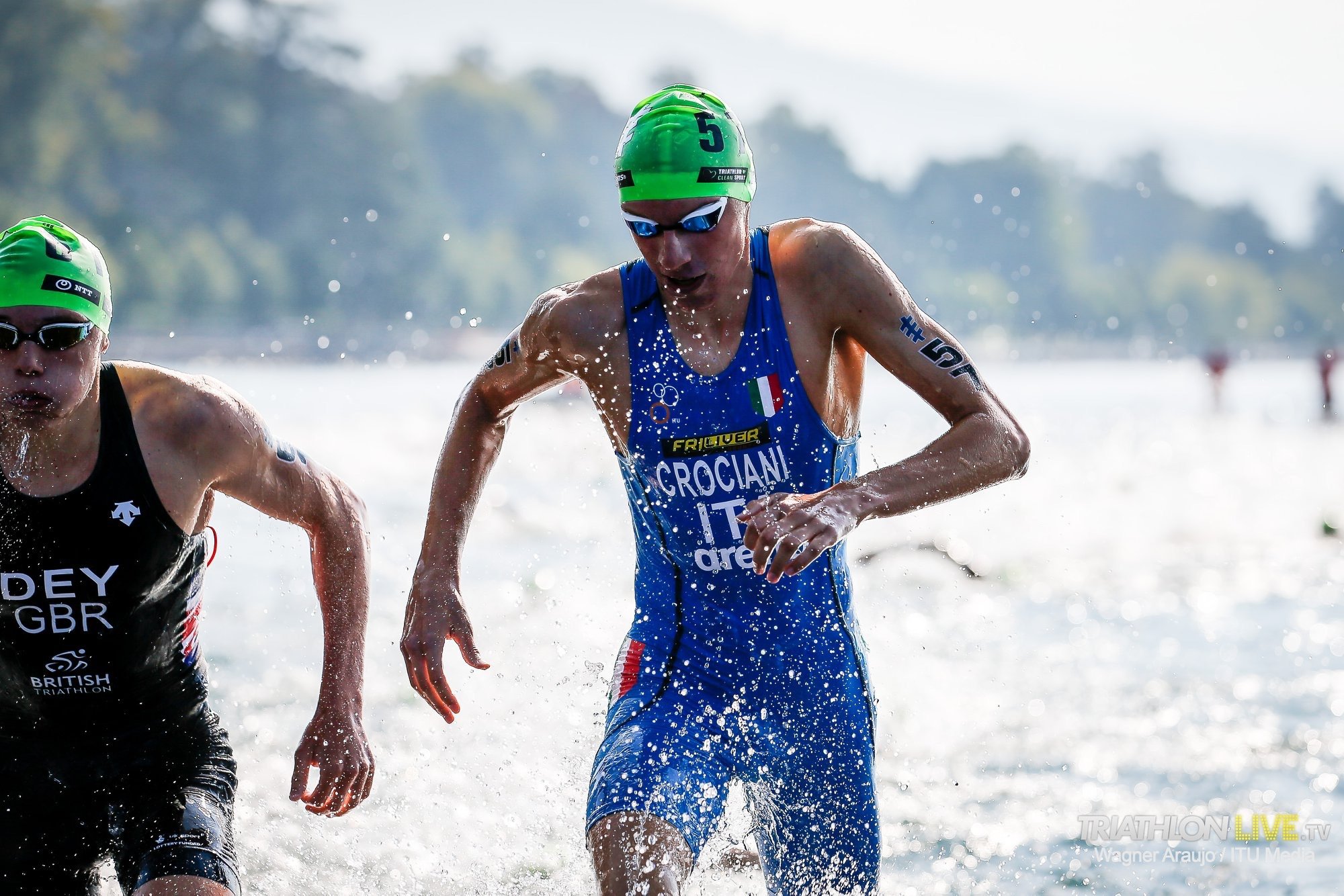 I had a good T1 (Swim to Bike Transition), I wanted to put the pressure on the rest of the field to try and split the field so that there was a small front group. I kept on doing lots of work on the 20km bike but it didn’t seem like the others wanted to work so we ended up getting caught by lots of people. We came into T2 (Bike to Run transition) with a group of around 45 athletes, with about 8 seconds between us all. It would all came down to the 5km run race. Despite this I was still optimistic as I had been running well over the past couple of weeks leading up to the race. 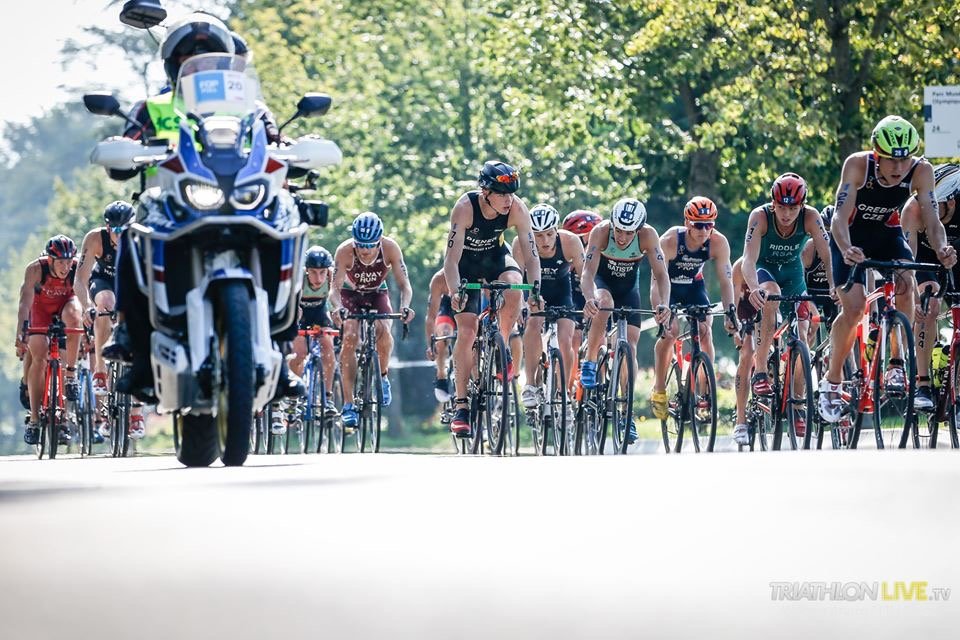 I didn't have a good T2 as I got slightly caught up in an incident with a few athletes who had fell over coming in, and I did well to avoid them. It meant however I wasn’t with the leaders coming out of T2. I quickly settled into the run to try and catch them which wasn't to be as I just didn't have the legs. 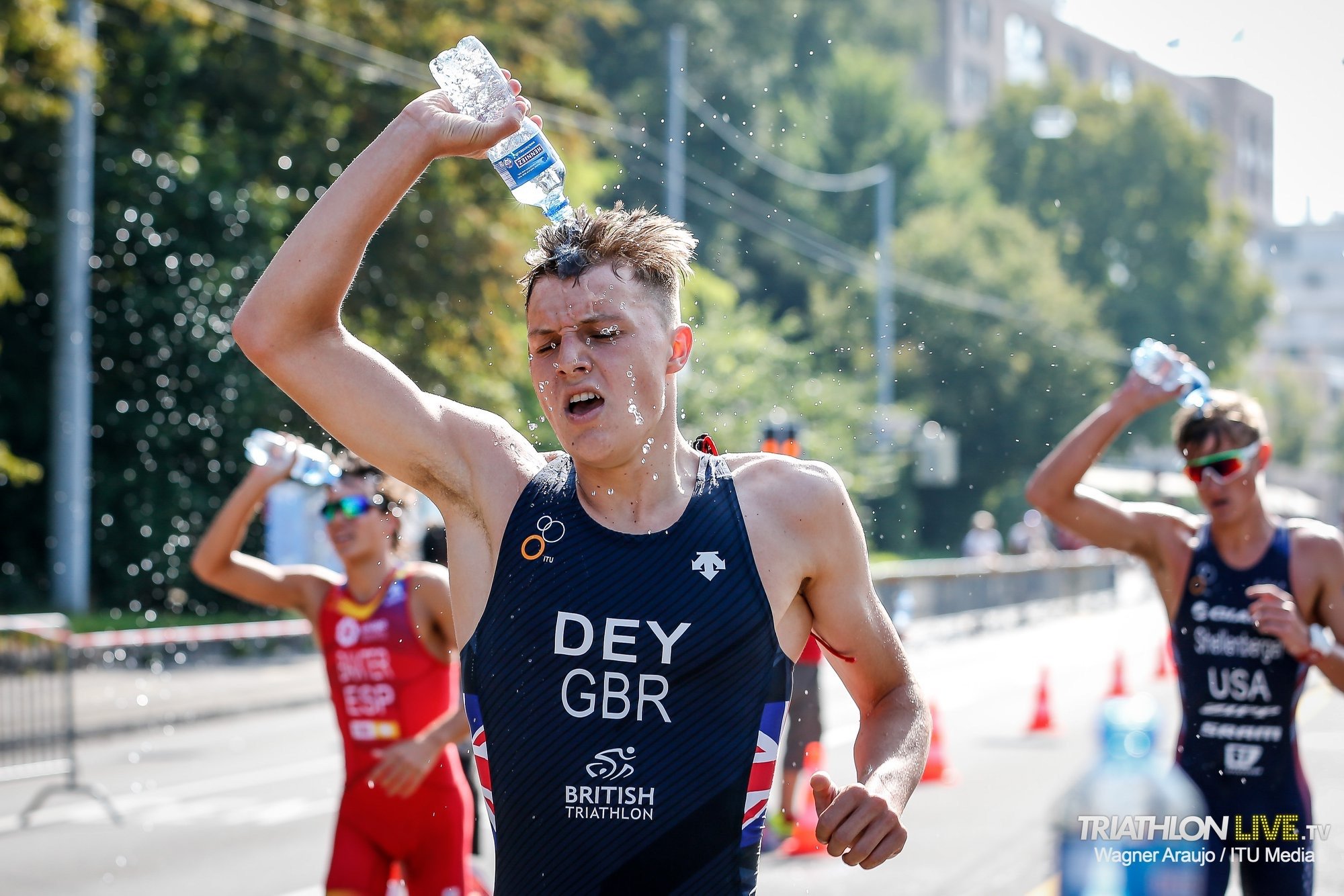 If things weren't bad already I also sensed a blister forming from my new running shoes, I had put a lot of work in at the start of the bike which evidently had took its toll. The temperature and the run course were quite brutal and I got to the finish line in a slightly disappointing 24th place.

Although this hadn't been my best race and I wasn’t particularly pleased with the outcome, I have still taken lots of positives away from it. I have learnt a lot and I am really optimistic for next season as I will have the chance subject to qualification to race in the Worlds again as I will still be in the Junior age group category.

The rest of the weekend I managed to take in the elite mens and women's races. It was a great opportunity to see these triathletes in the flesh and watch them race rather than on TV.

Next month I will have my final triathlon of the year in this country at the British Triathlons Big Weekend which will include the British Junior Championship race. This will be held at Mallory Park racing circuit, I am hoping to end the season on a high.

I will also be starting university at Loughborough. Something I am really looking forward too. So I will up date you all next month on how everything is going.