May has been a very successful month and I have achieved a couple of my goals that I set myself for the season. My main goal has been gaining qualification for the European Junior Triathlon championships in Weert, Holland. My second goal was getting a new 10km PB at the Great Manchester 10K.

Qualification for the European Junior Triathlon championships would be decided at the Llanelli British Super Series Sprint Triathlon. In this race the Juniors (under 20’s, my age group) would compete in the same race as the under 23’s. The top three Juniors would gain automatic selection for the Great Britain team and would represent GB in the European Triathlon Championships next month in Weert, Netherlands. This was a big race and it attracted all of the best Junior triathletes from all over the UK. Our race was much later than normal on the Saturday, allowing me plenty of time on the day to prepare. Being earmarked as one of my “A” races for the season meant that it was a race that I wanted to perform well at.The week leading up to the race I had eased up with my training regime and was feeling rested, and in pretty good shape. After setting up my transition and warming up, we lined up in order of our European ETU ranking. It was a beech start whereby we started on land and on the gun we ran into the water and attempted to dive in without getting drowned. 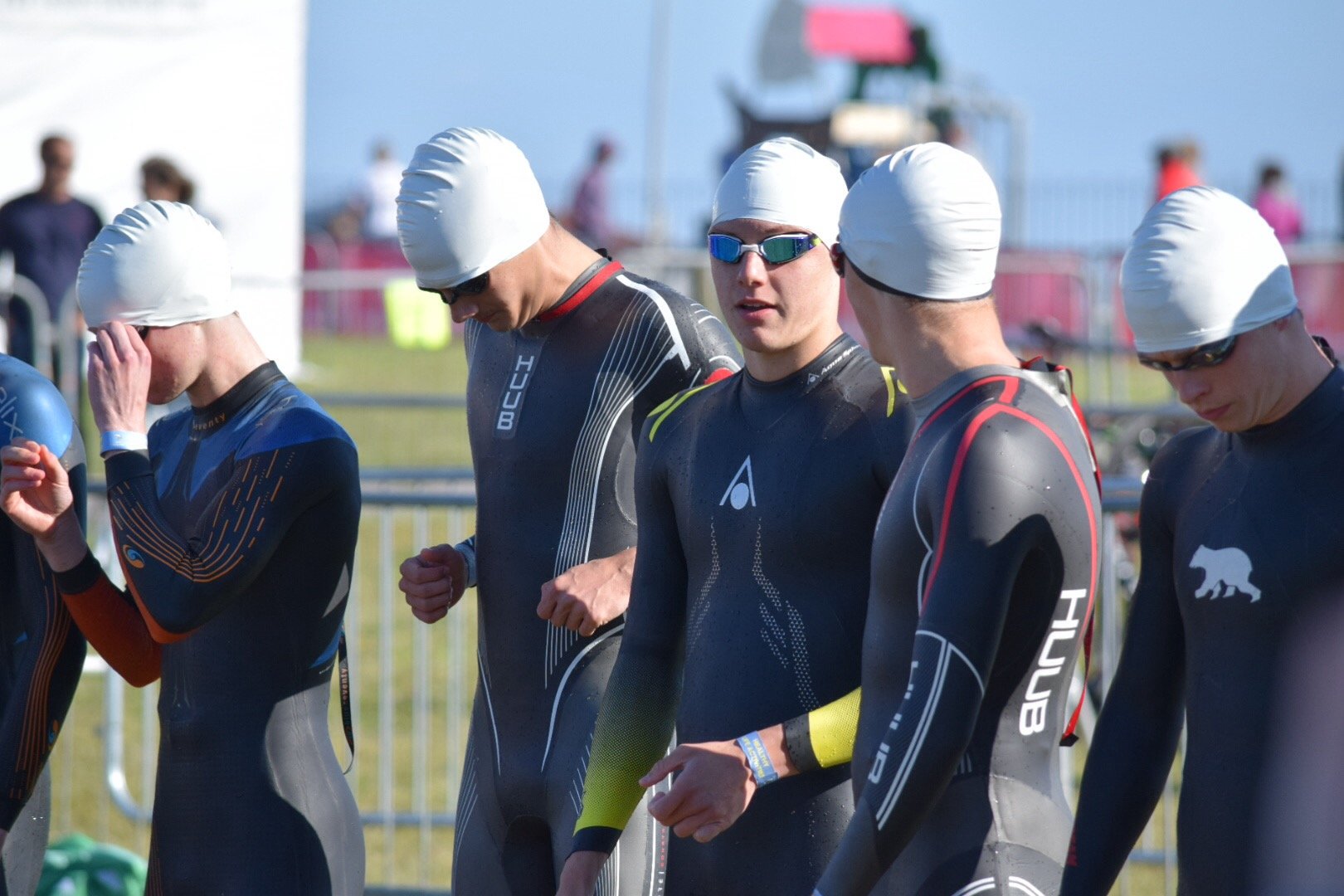 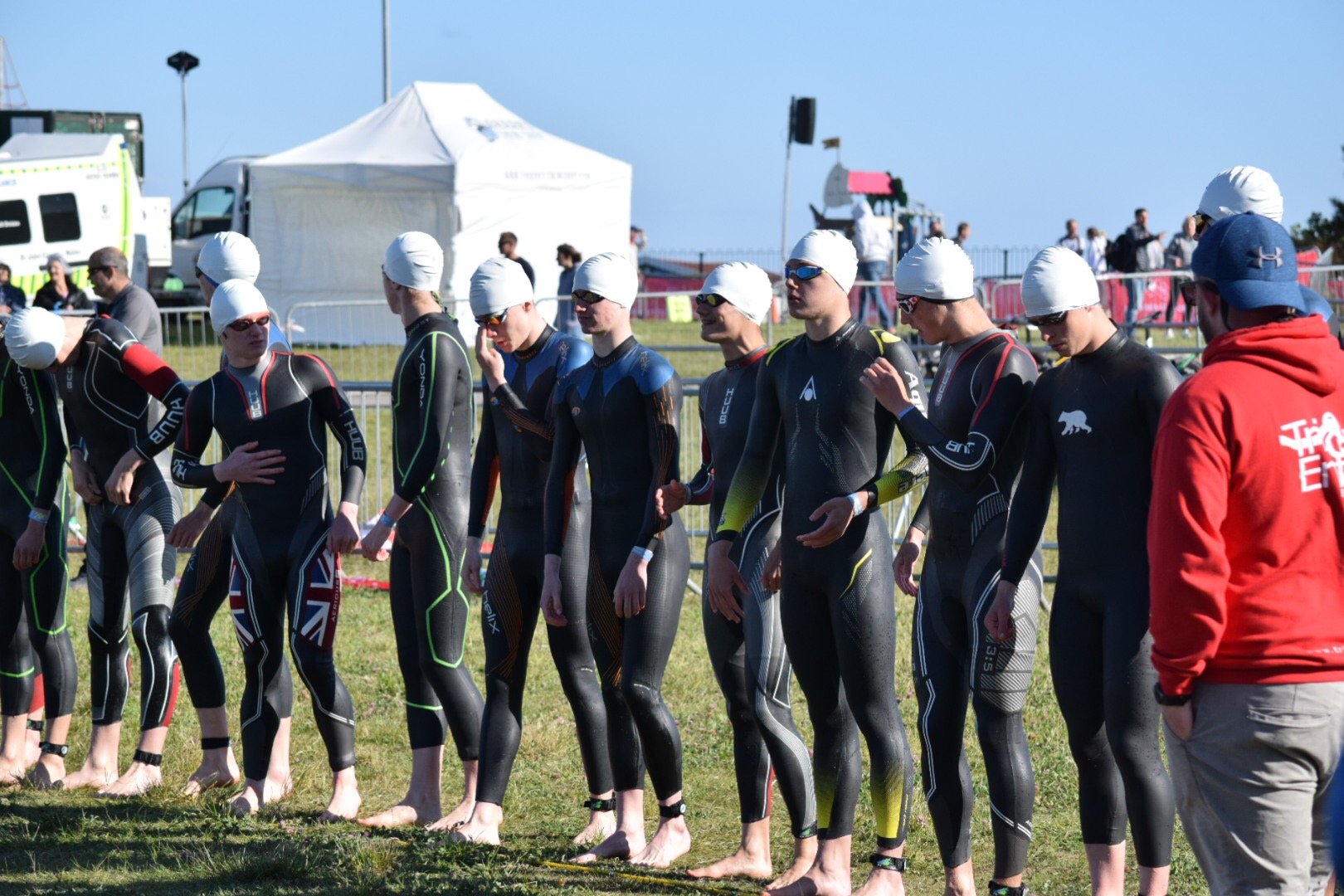 My start went well and I instantly gained a lead at the start of the swim. As the pace settled down, I sat on the feet of the leader the entire way around the 750m swim course. The swim felt relatively easy allowing me to save more energy for the rest of the race. I messed up my first transition (T1) quite badly by running down the wrong lane of racking. 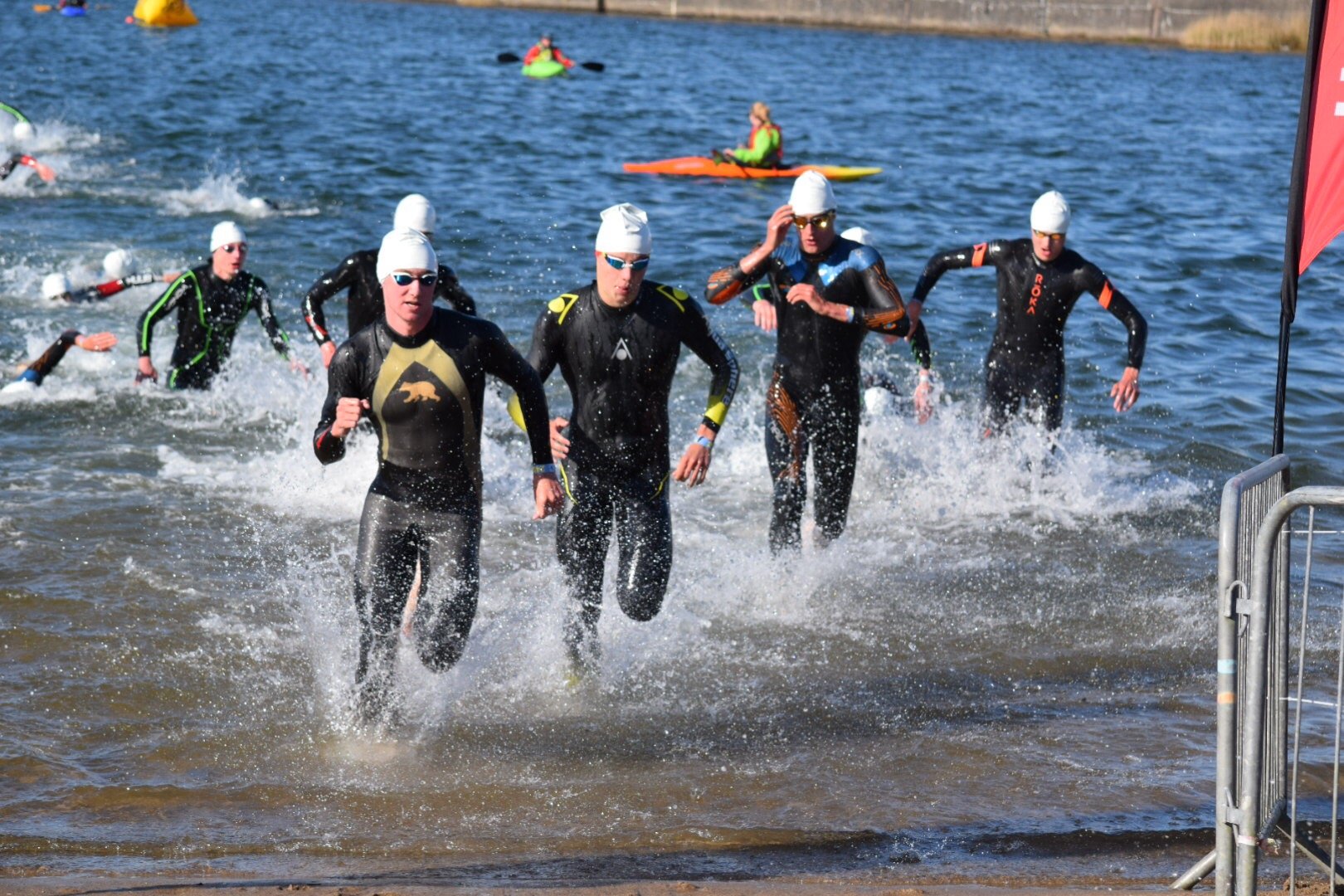 Fortunately for me, my new Aqua sphere Racer 2.0 wet suit is really easy to get off, allowing me to make up lost time. I fortunately made the front bike pack. 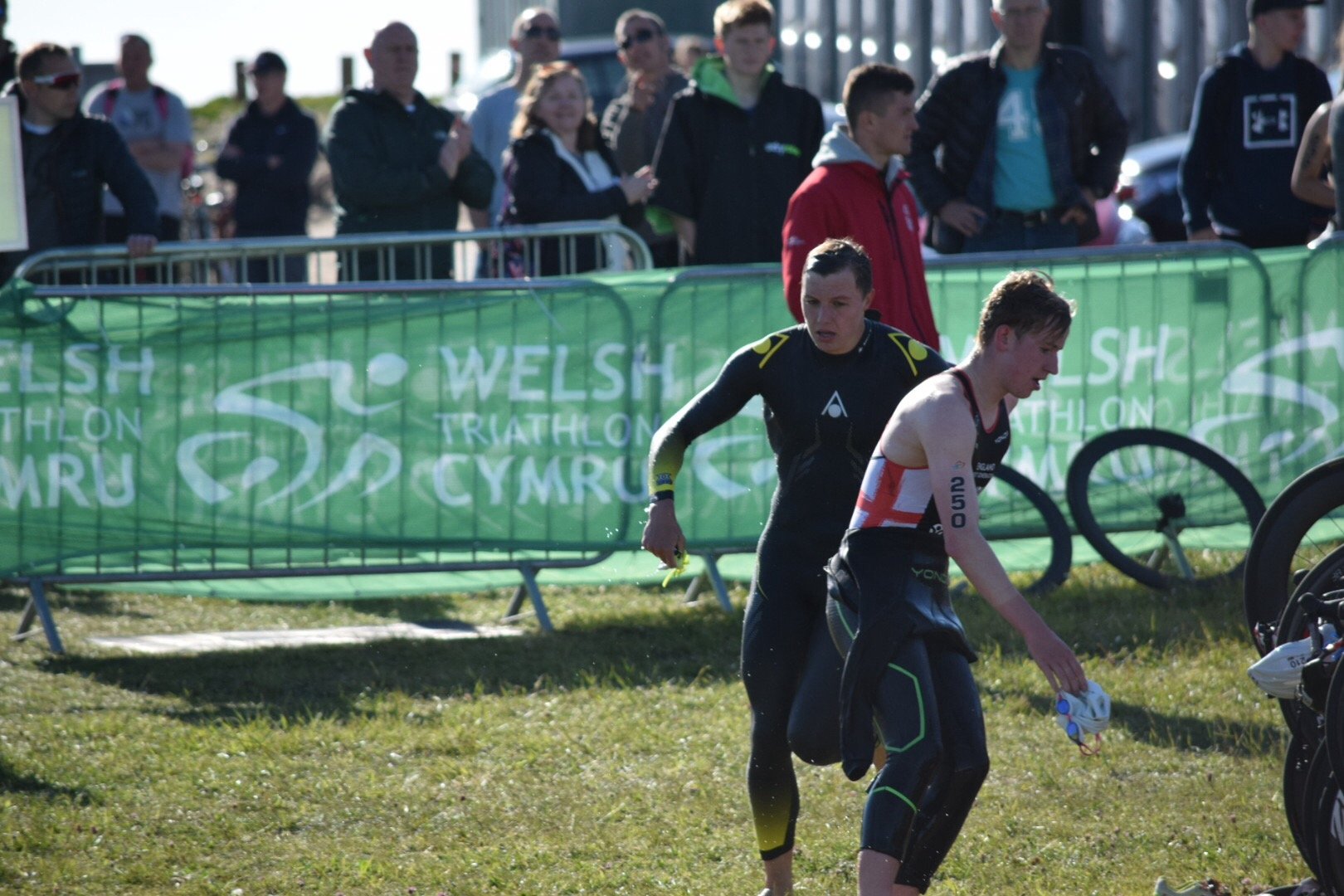 As we left T1 the lead bike pack of around 10-12 athletes settled down and we started to work together, looking around within the lead bike pack there was only another three other Juniors in it. With only the first three Juniors qualifying meant I was in with a shout. 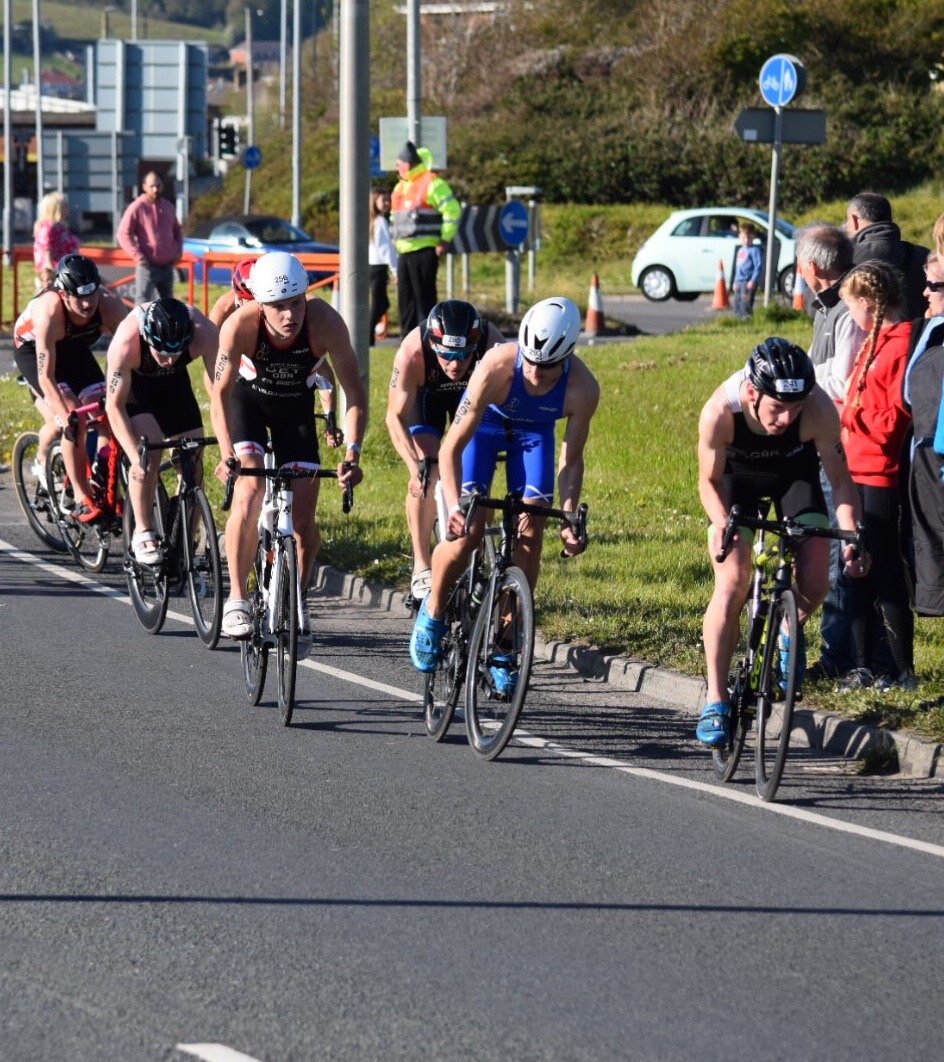 The rest of the group were seniors, we shared turns on the front and managed to increase our gap on the chase pack. Over the 5 laps we managed to get a 50 seconds on them over the 20km bike. Our group of 12 athletes came into transition 2 (T2). 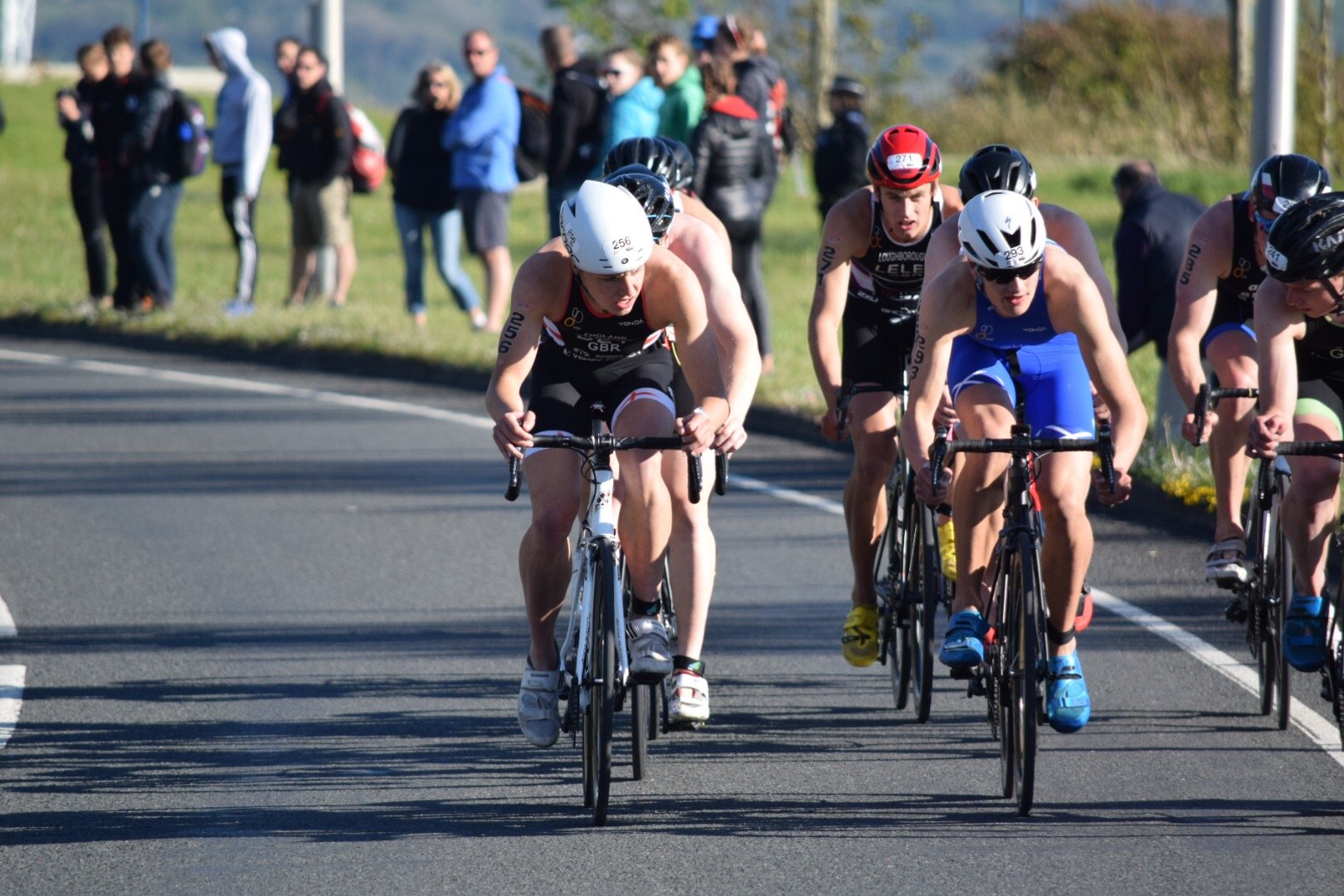 I had a solid transition coming out in 3rd and I quickly took the lead on the run within the first couple of hundred meters. The 5k run course was very windy which made it extra tough. I had around a 5-10 second advantage on the rest of the field at around 1.25k and I knew I had to hold it. My running didn’t feel good and my stomach felt horrible, but I just kept on pushing on. 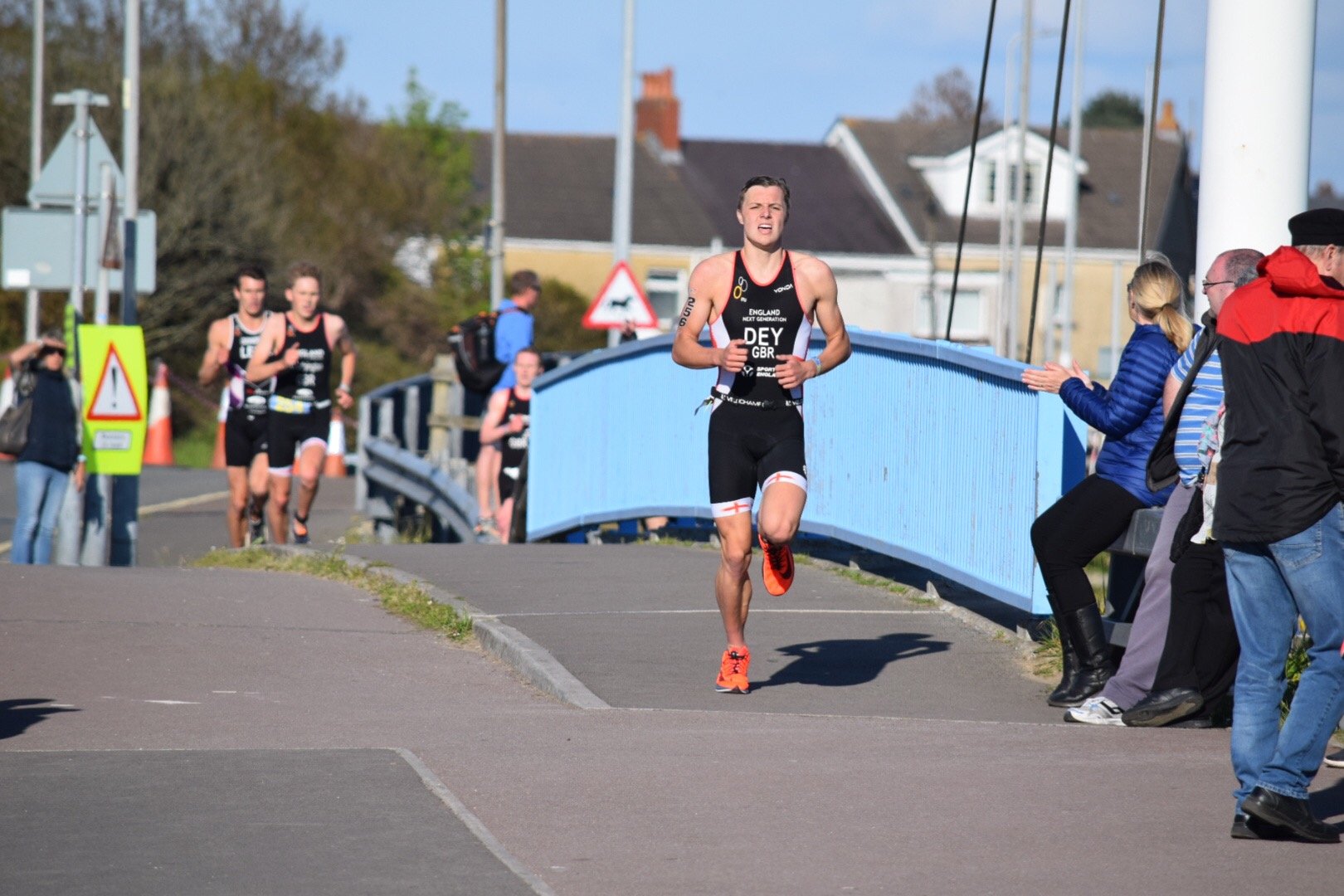 I managed to retain my lead all the way to the finish and I took the overall win, I was surprised to beat all of the seniors too. 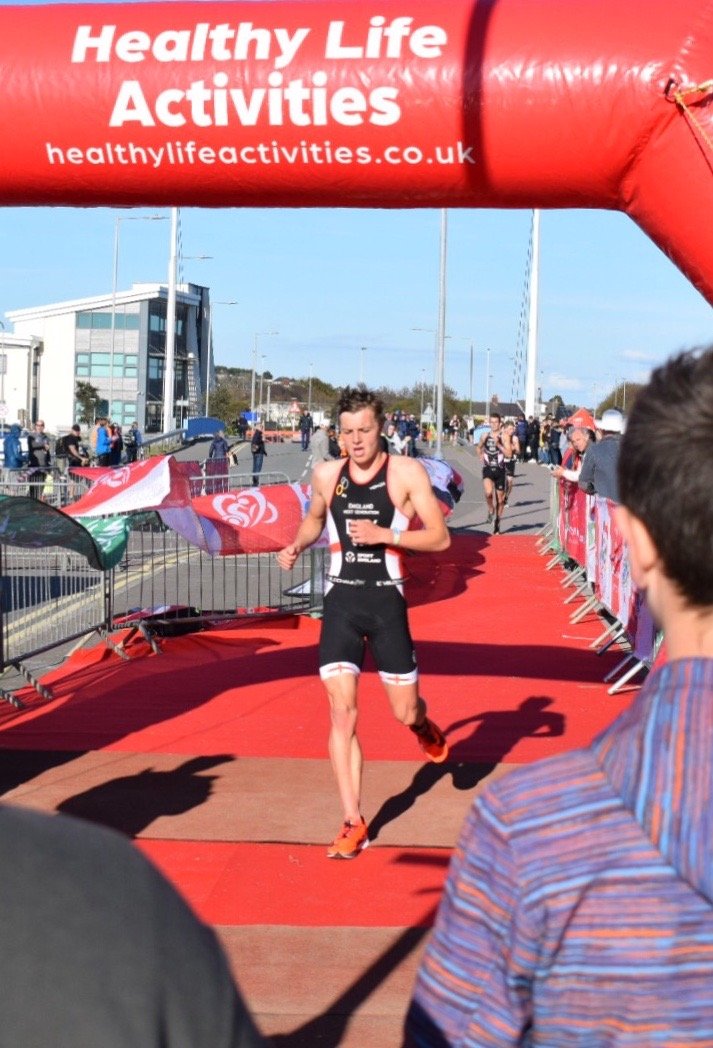 I was delighted to take the win but more importantly relieved to have qualified for the European championships which will be held next month. 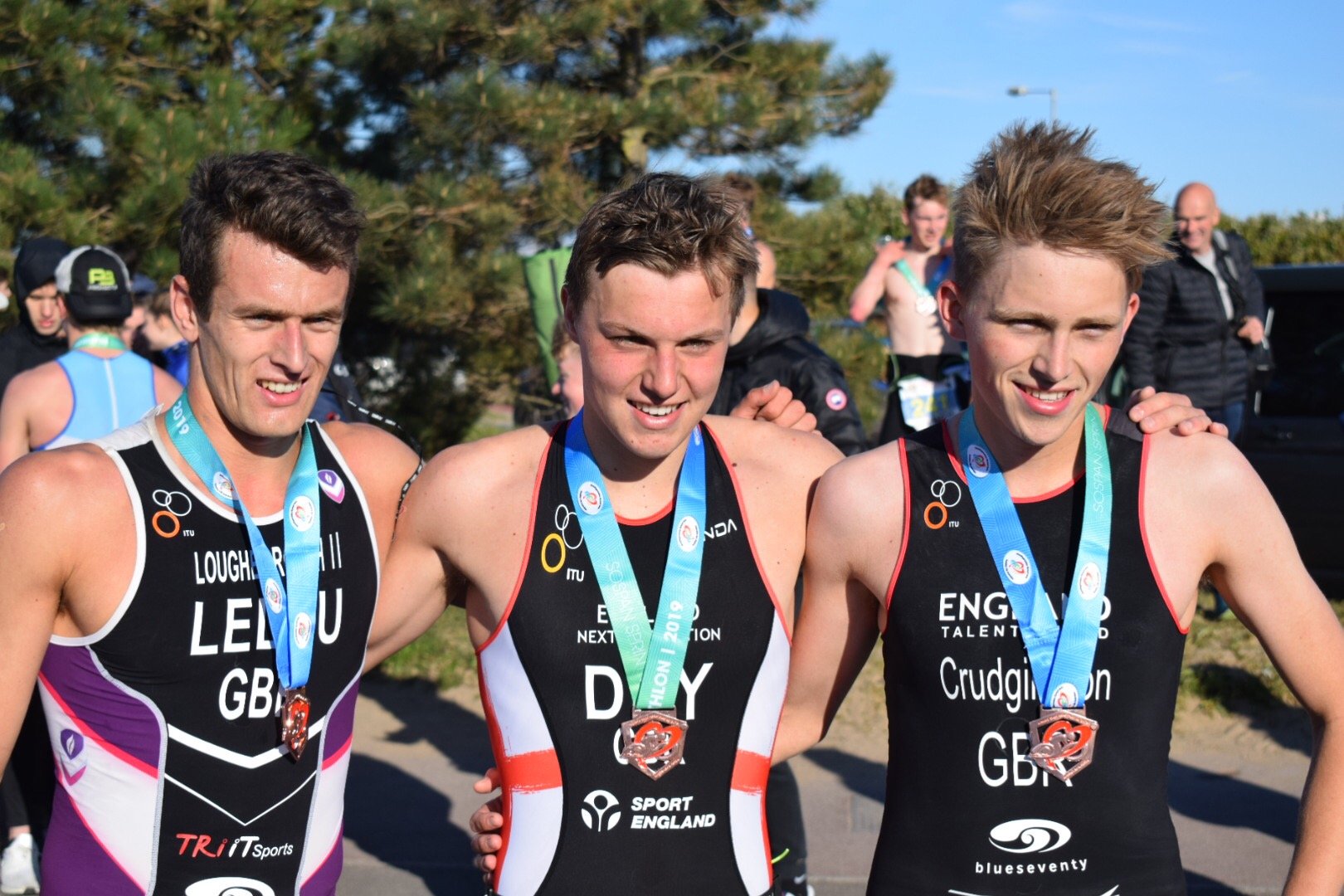 After a few recovery days, the following weekend saw me racing in the Great Manchester 10k. This is a really good race and generates a great atmosphere. It is one of a few events that allows me to race in my home city of Manchester. The event is televised by the BBC and attracts a lot of international runners, club and recreational runners all racing on the same course. This year the event attracted over 30,000 runners. 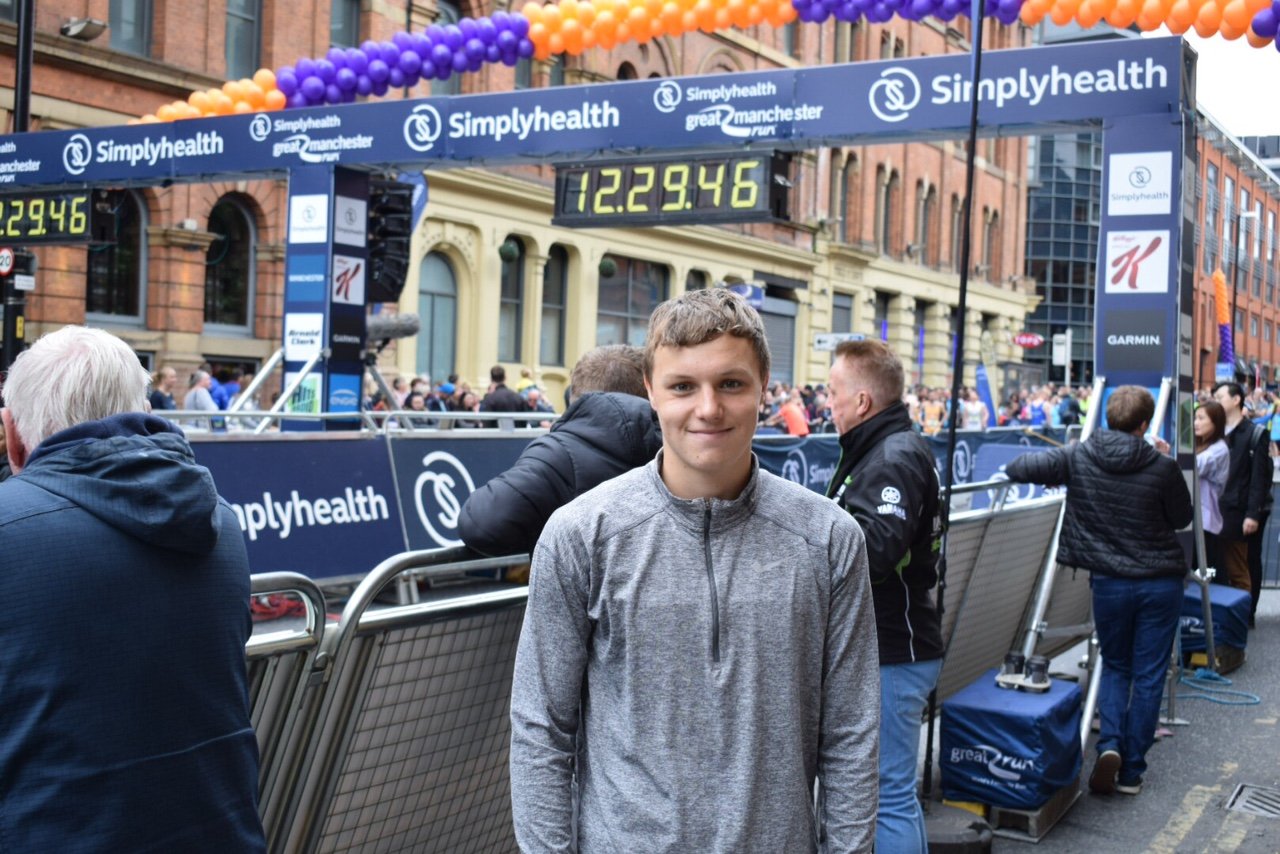 When I ran it the previous year I limped to the finish in an embarrassing time due to severe cramping. This year I was determined to have a good race. I lined up within the front few rows of the masses meaning that it wasn’t too crowded at the start. 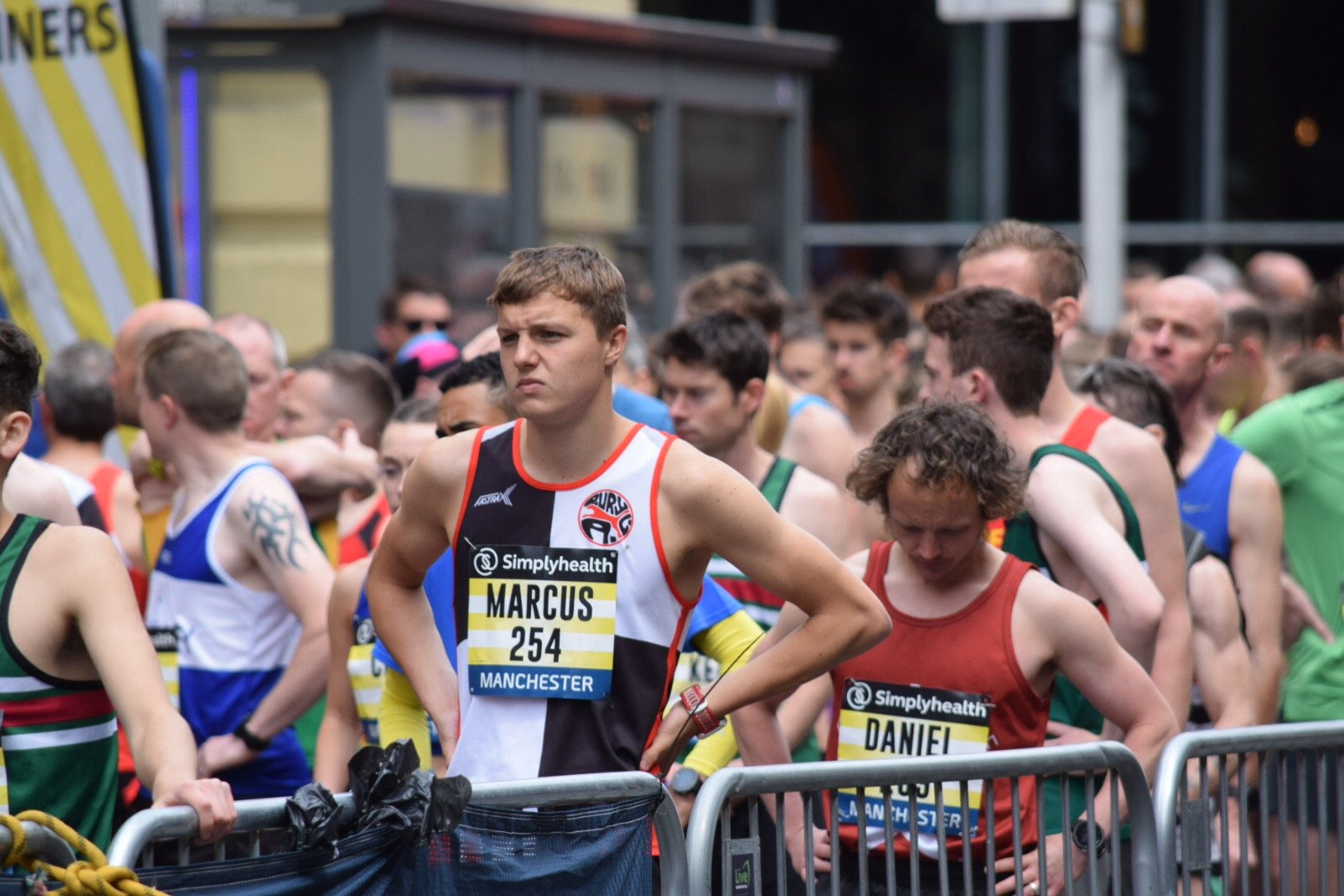 I was aiming to get a time of 32.30 which is a pace of 3.15 per kilometre. I went out in the first kilometre a little bit faster than that and settled into a good pace which I felt like I could hold. By around 3 kilometres I started getting quite hot as it was a warm day. I decide to take some water on board at the water stations. I reached the 5k marker in 16.25 meaning that I was already off the pace for my target time. I kept pushing through and started catching one or two people each kilometre, which kept my motivation meaning I was just aiming to catch the person in front. I managed to keep a good pace all the way to the line and finished in 32.50 which meant that my second 5k was also 16.25. If you look over my left shoulder (on the photo below) you will see Gabby Logan doing the commentary for the BBC. 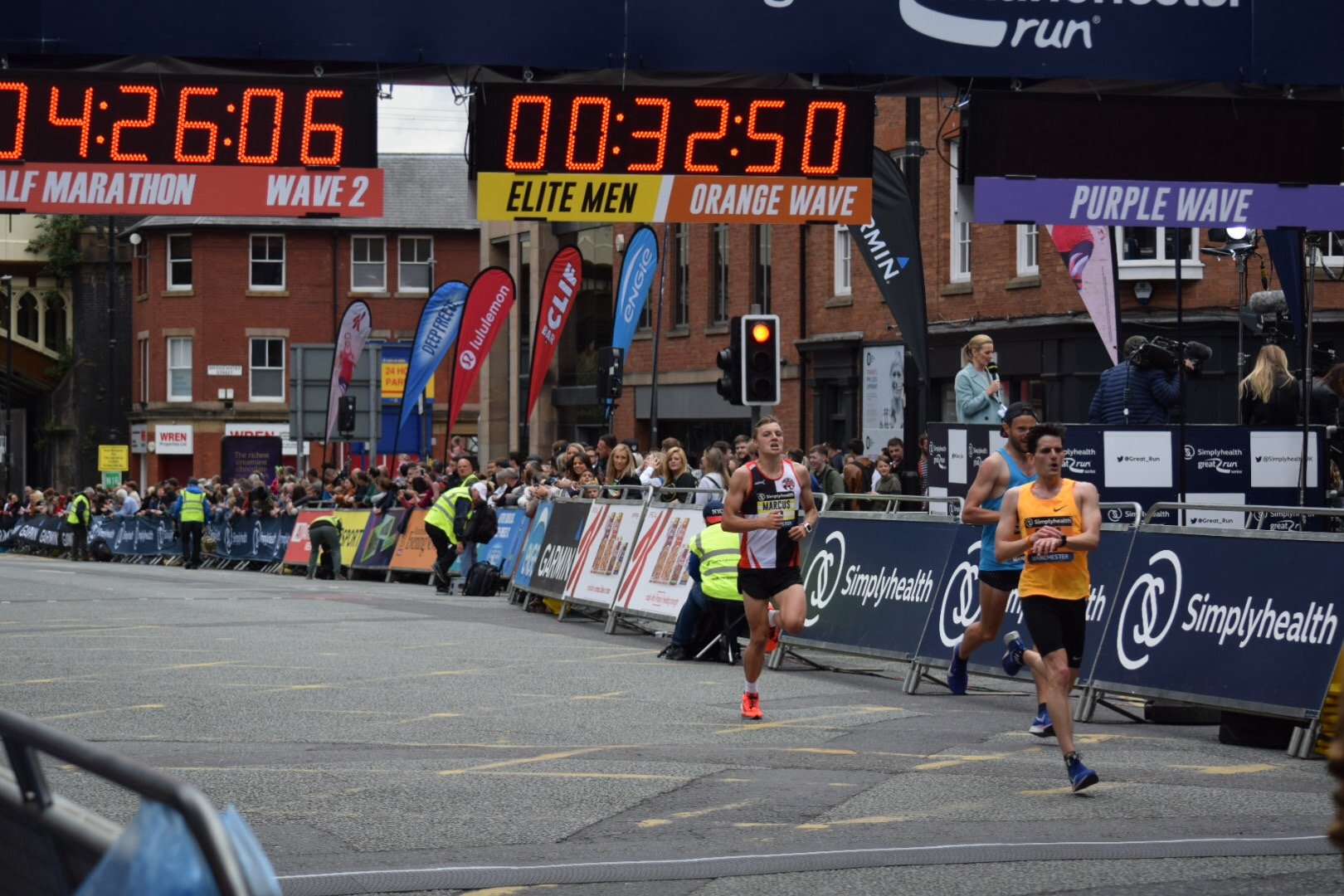 This was a perfectly even split race which shows that my fitness is quite high. I was pleased with the time as it was a PB and I ended up placing 38th out of over 20,000 people. This was encouraging as I was racing against a rather elite field.

Next month I will be competing in three triathlons and it will be my busiest month of the season. I will be hoping that the heavy winter training pays off. I will be competing in the European Junior Triathlon championships in the Netherlands. I will race at Leeds WTS in the British Junior Super Series, and finally at the end of June I will travel to Cardiff for the Elite Mens British Sprint Championships. I will let you all know how I get on in next months blog.