Junior Super Series, SuperLeague Jersey. This was my final month of racing before my season came to an end. This month I raced in the British Junior Triathlon Championships in the Under 20s Festival and in the Junior Super league event held in Jersey.

The British Junior Triathlon Championships was my first race this month. This was the final race in the British Super Series and was to be the deciding race for the overall series standings. The race was held in Mallory Park, Leicester. 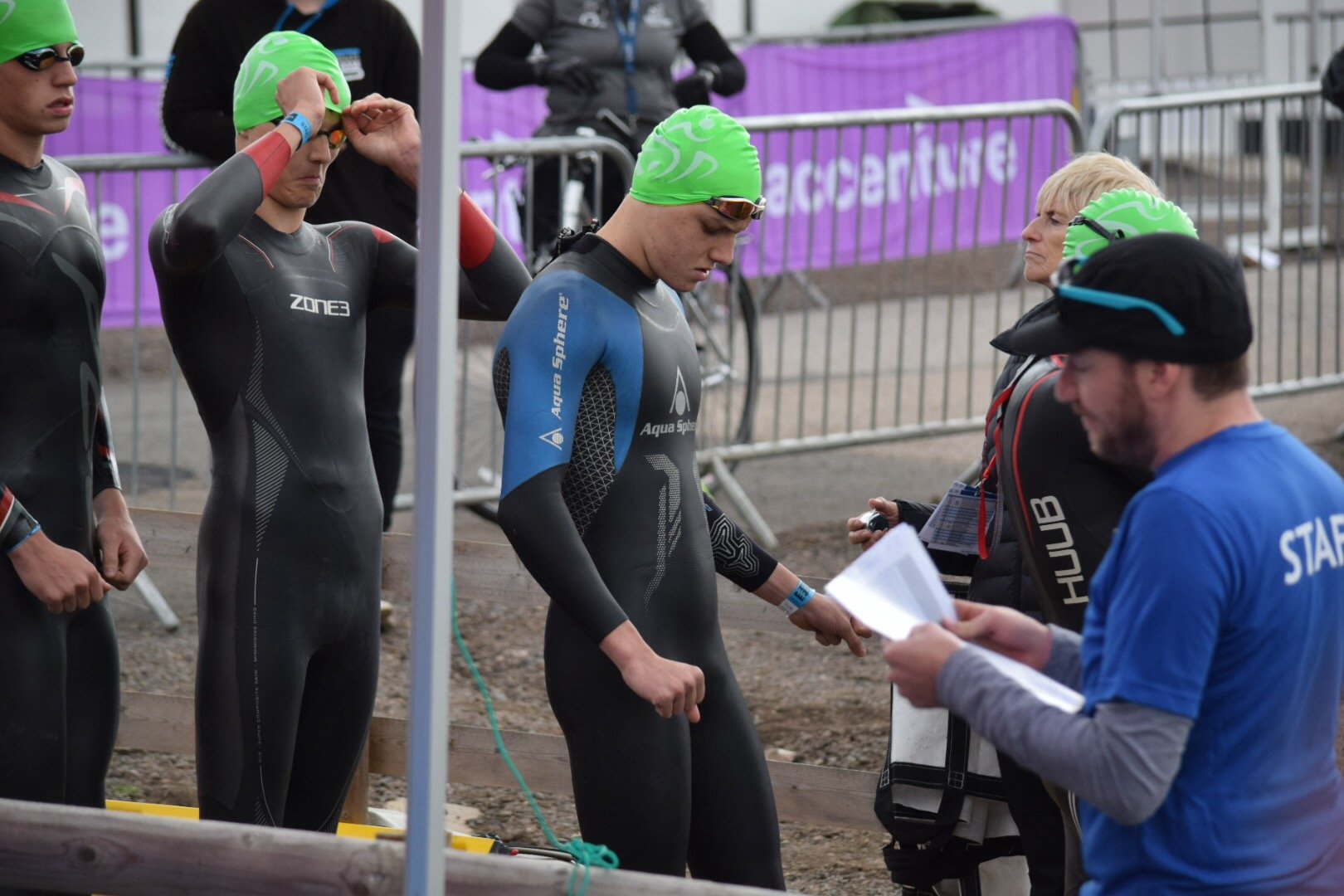 It was a hectic start and wasn’t to my advantage at all as it was a deep water start. My swim went quite bad to say the least as I just got pulled back and caught up in the masses meaning I couldn’t get to my usual position leading the swim. I fought my way around the 750m swim course and managed to come out in around 5th. Luckily I had a great transition and got onto the bike in joint first. 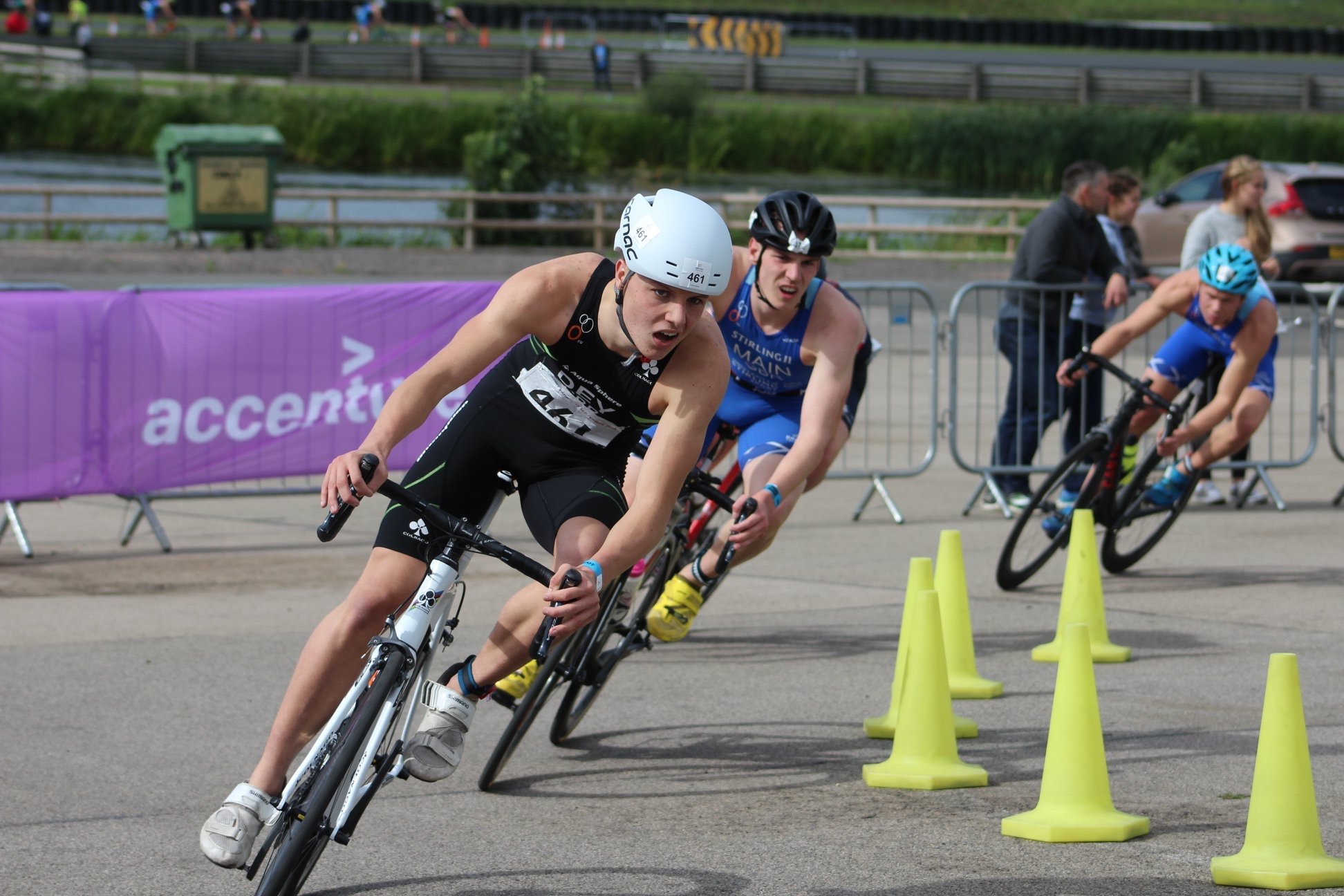 There wasn’t really any significant gap to separate the front pack from the rest of the field for the first half of the first lap. As I was near the front I managed to increase the pace of the long line of athletes and successfully broke the line apart and the front pack had formed. It was a group of around 6 riders along with a French athlete that was allowed to race. I knew there were some very strong runners in the pack behind us so we had to get a lead on the bike. We kept on receiving time gaps of around 20 seconds to what I thought was a large chasing pack. Because of this I took it upon myself to get ourselves a lead by putting the ‘hammer down’ as they say. 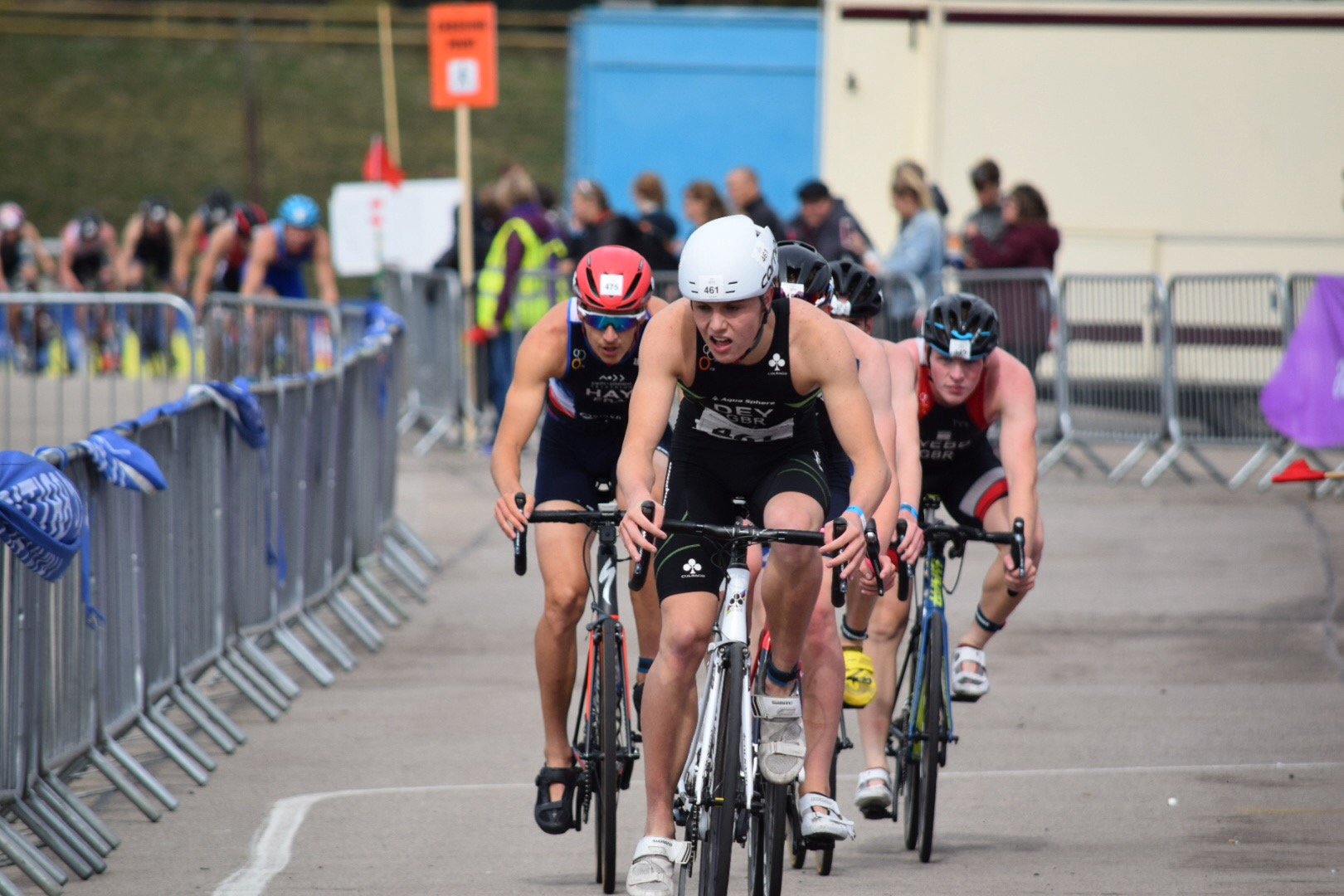 I sat on the front of the pack for a lot of the 20km bike leg to get ourselves away from the others. It turned out that the time gaps we were getting were to a single athlete and I had actually pulled our group 2 minutes in front of the chasing pack. In hindsight I did too much work on the bike and I definitely paid for it on the run. 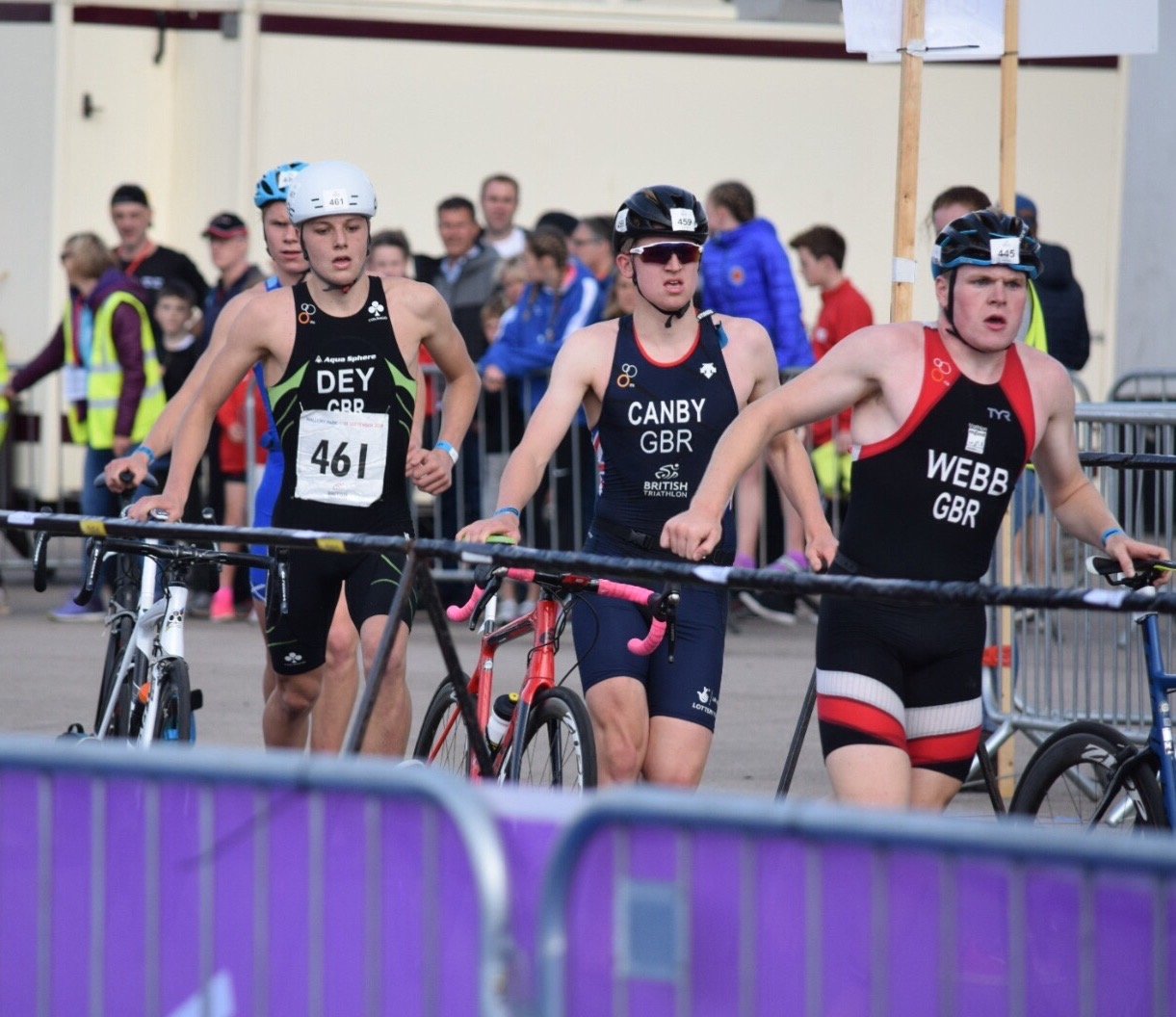 I had a solid transition and went out onto the four lap run with the leaders. 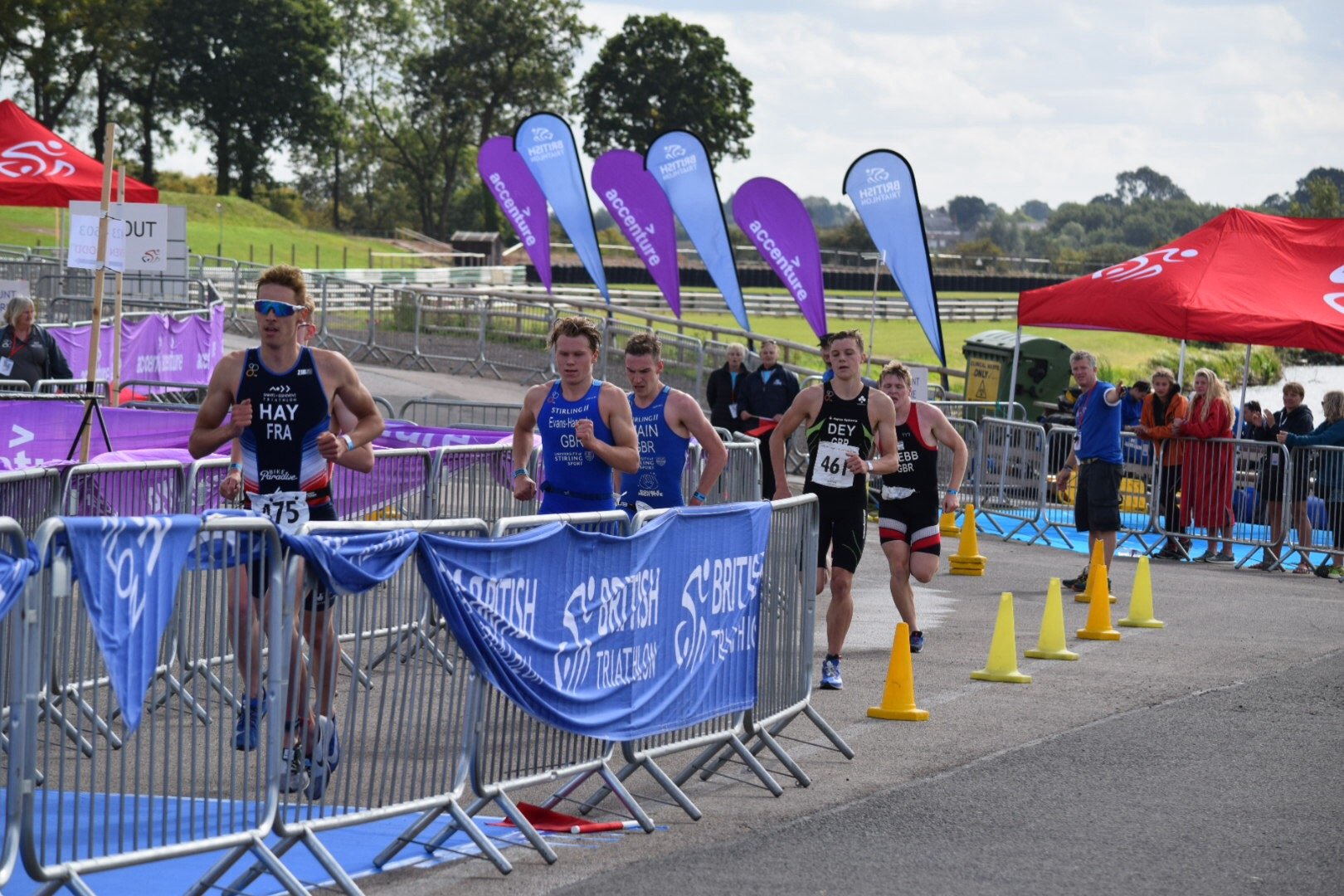 After one lap I was still with the lead group of 4 but saw my number on the penalty board. 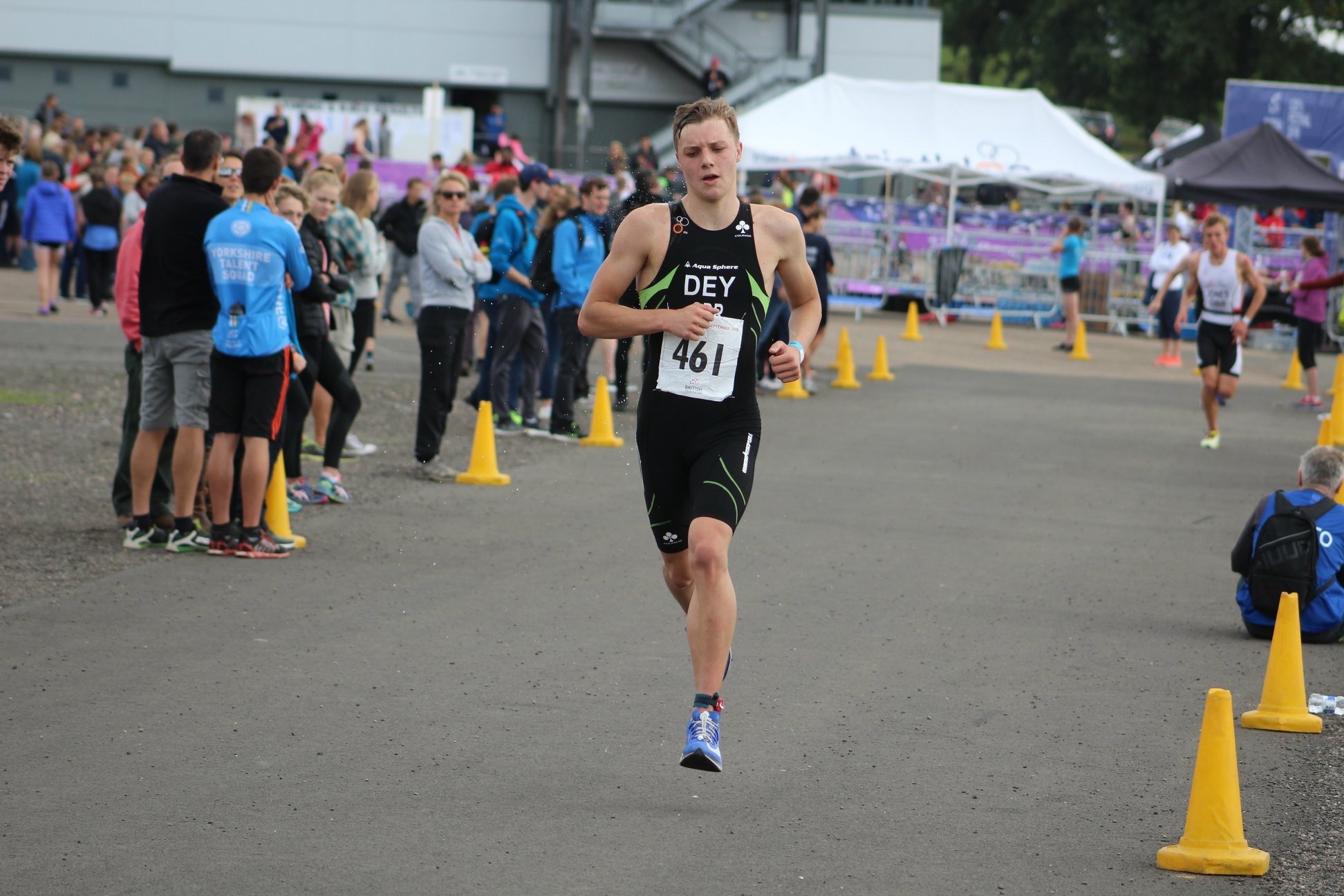 I took my time penalty on the next lap which meant I lost contact with the leaders and came out of the penalty box in 5th place. I didn’t know what the penalty was for but I just took it anyway because If I didn’t I would have been disqualified. I was then unable to catch anyone in front of me and ended up finishing in 5th place (4th Brit). After I had finished I asked the race referee why I had a penalty and apparently I racked my bike in the wrong place even though it was directly above my running shoes. Regardless of the controversial penalty, I didn’t have the legs on the day and it was a disappointing result. Despite my bad race, and a nail biting twenty minutes while we added up the points, I had still done enough to take the overall Junior Super Series. 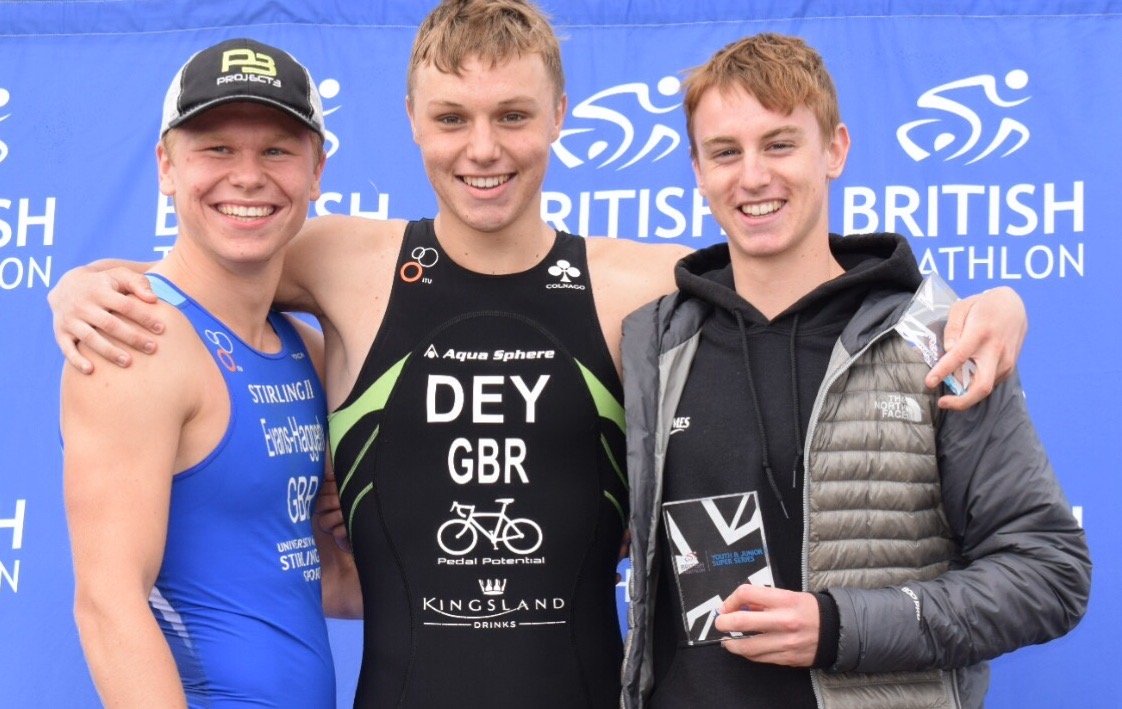 After such a disappointing race I was determined to finish the season on a high.The next race and my final race of the season, would be in Jersey in the new SuperLeague. I had a couple of weeks to prepare.

This was the first ever Junior SuperLeague Triathlon race and Junior athletes from all over Europe had been invited to compete. I had never raced in anything like this before and was a new concept in the sport, introduced by the people behind IronMan. The aim of which was to make the sport more spectator friendly. It was going to be fast and furious, and would take the form of two smaller triathlons raced back to back with a couple of minutes rest in between and was known as the Enduro. This was made even more exiting by the fact that we were racing on the same course on the same day as the worlds best triathletes such as Jonny Brownlee, Richard Murray, Kristian Blummenfelt, Henri Schoemann and Vincent Louis, who would compete in the Elite Mens race.

We even got to race in the same suits as them.

The first triathlon didn’t start great as It was a fight to get to the first buoy. I only came out in around 4th position after getting battered in the swim. the bike leg was 3 laps of a 1km course with 6 turns making it full of accelerations and opportunities to crash. I was in a fairly large front pack and worked my way through around 6 riders. 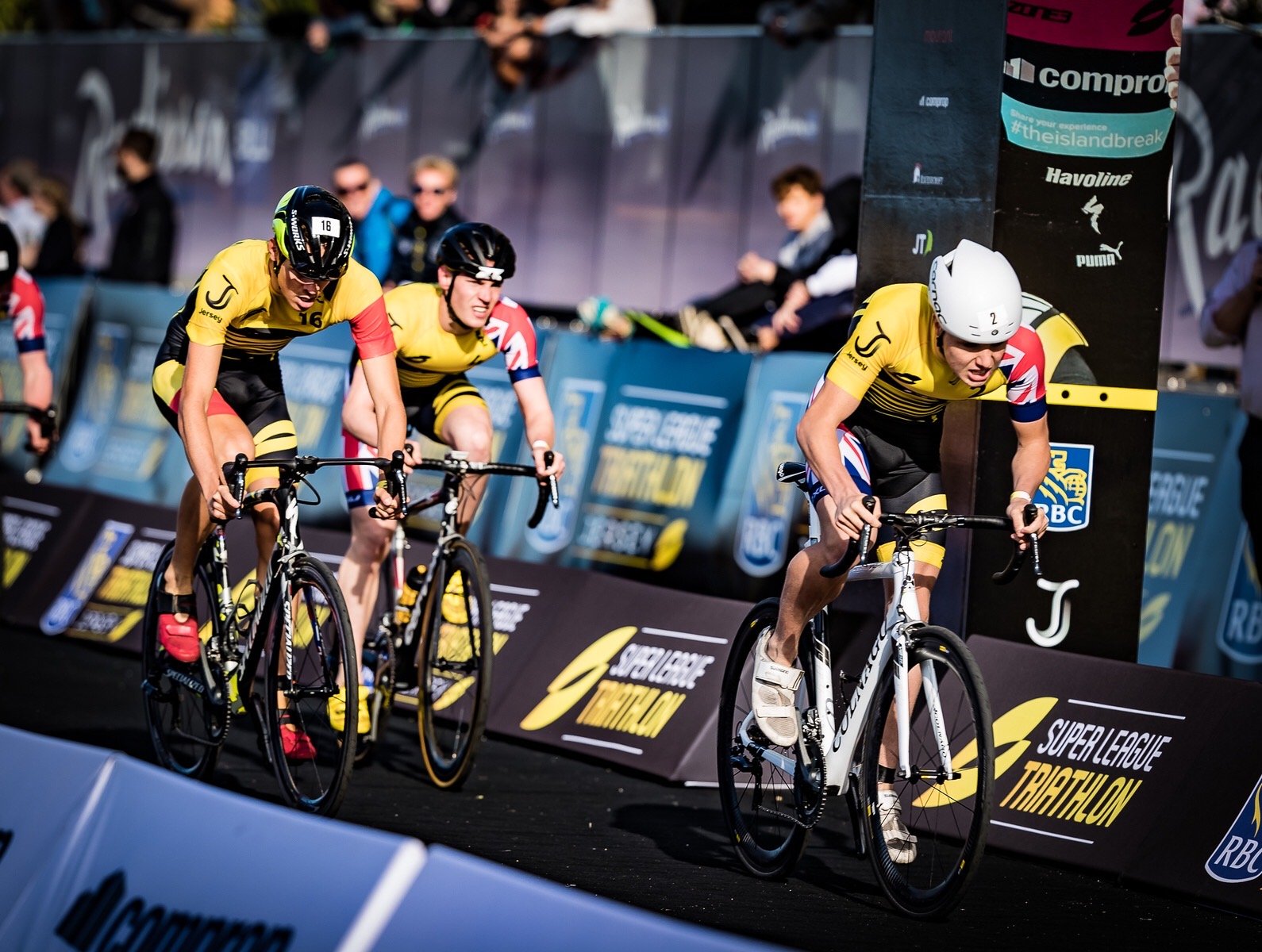 I came into T2 in first, and after the run I finished in joint first with my training partner Ollie Makinson after we had a good solid run. But that didn’t matter because it only gave me a slight advantage in the second race. 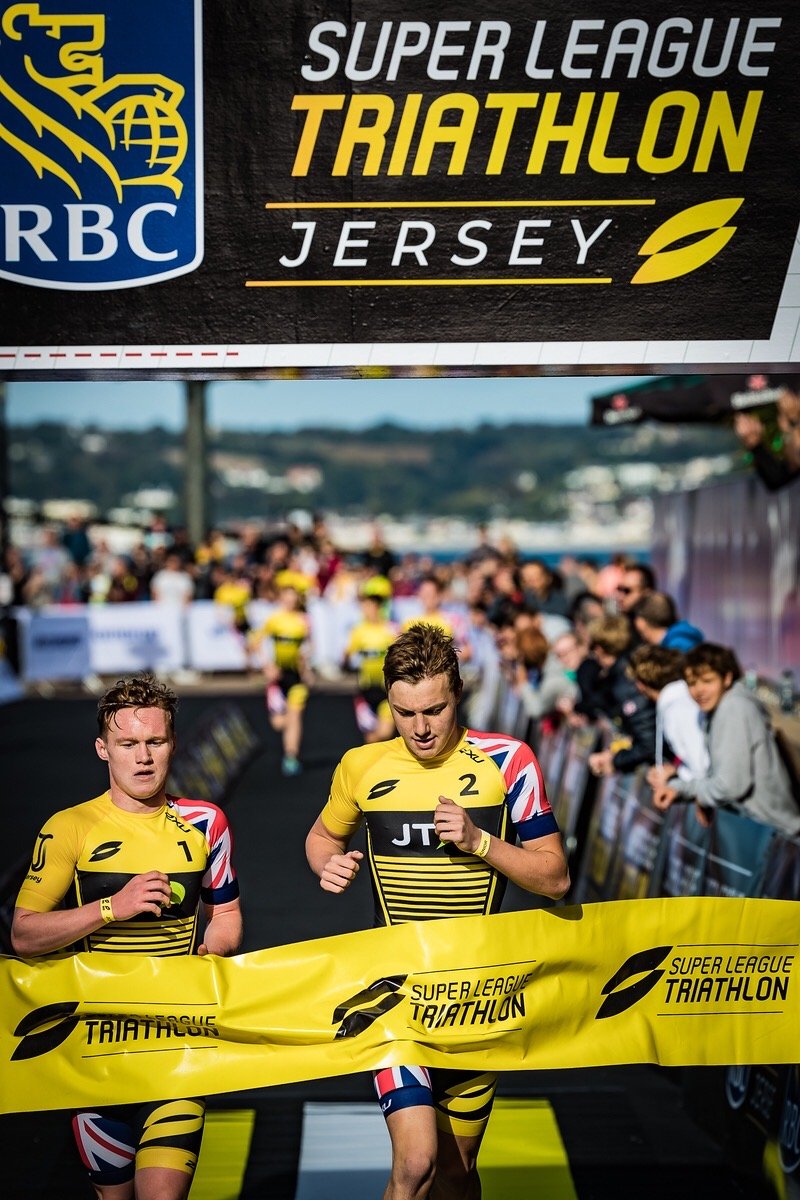 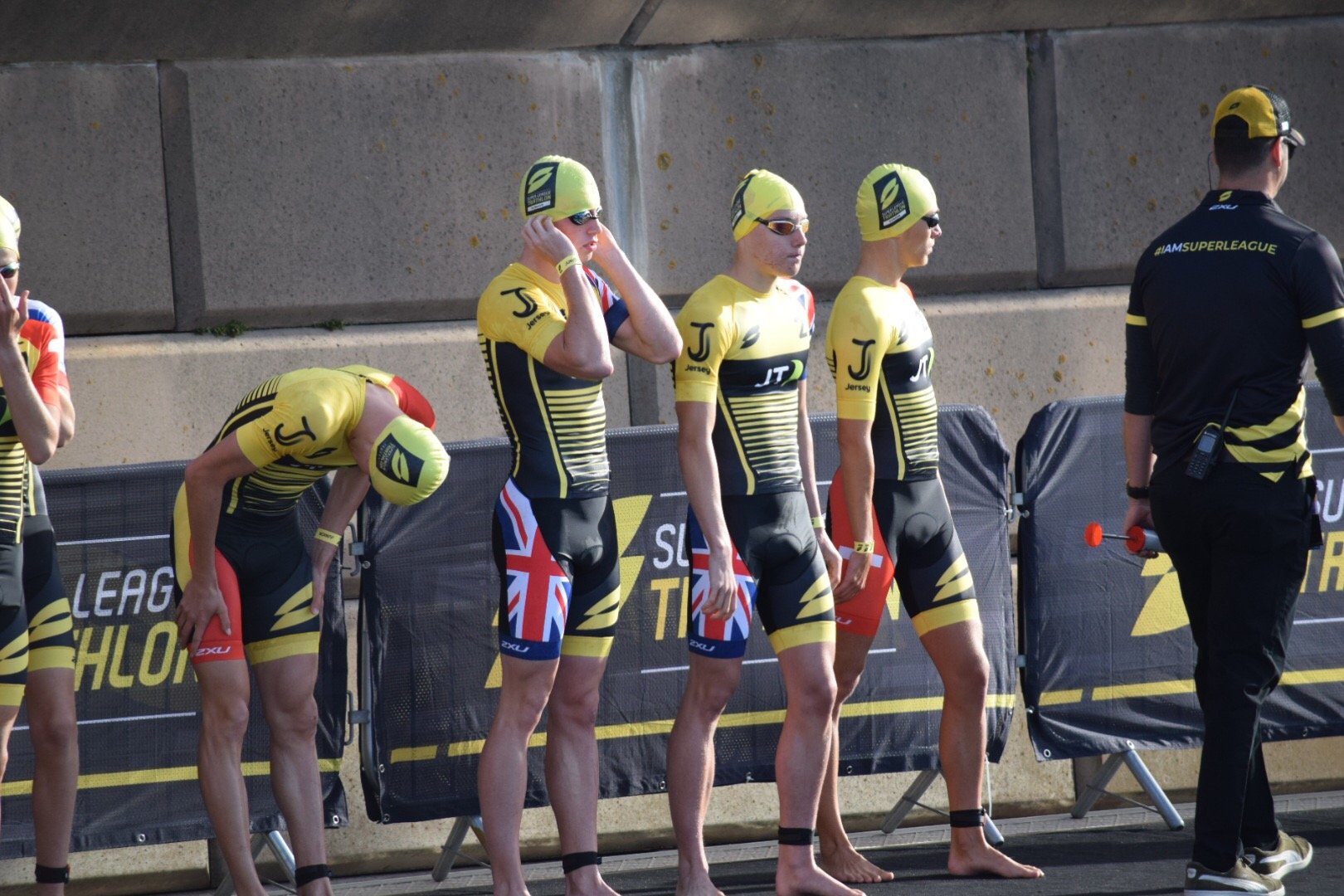 I gained the lead straight away on the swim and came out first with about a 2 second advantage. I then didn’t look back. I just went full gas for the entire thing. I set off on the bike and was cornering really well. 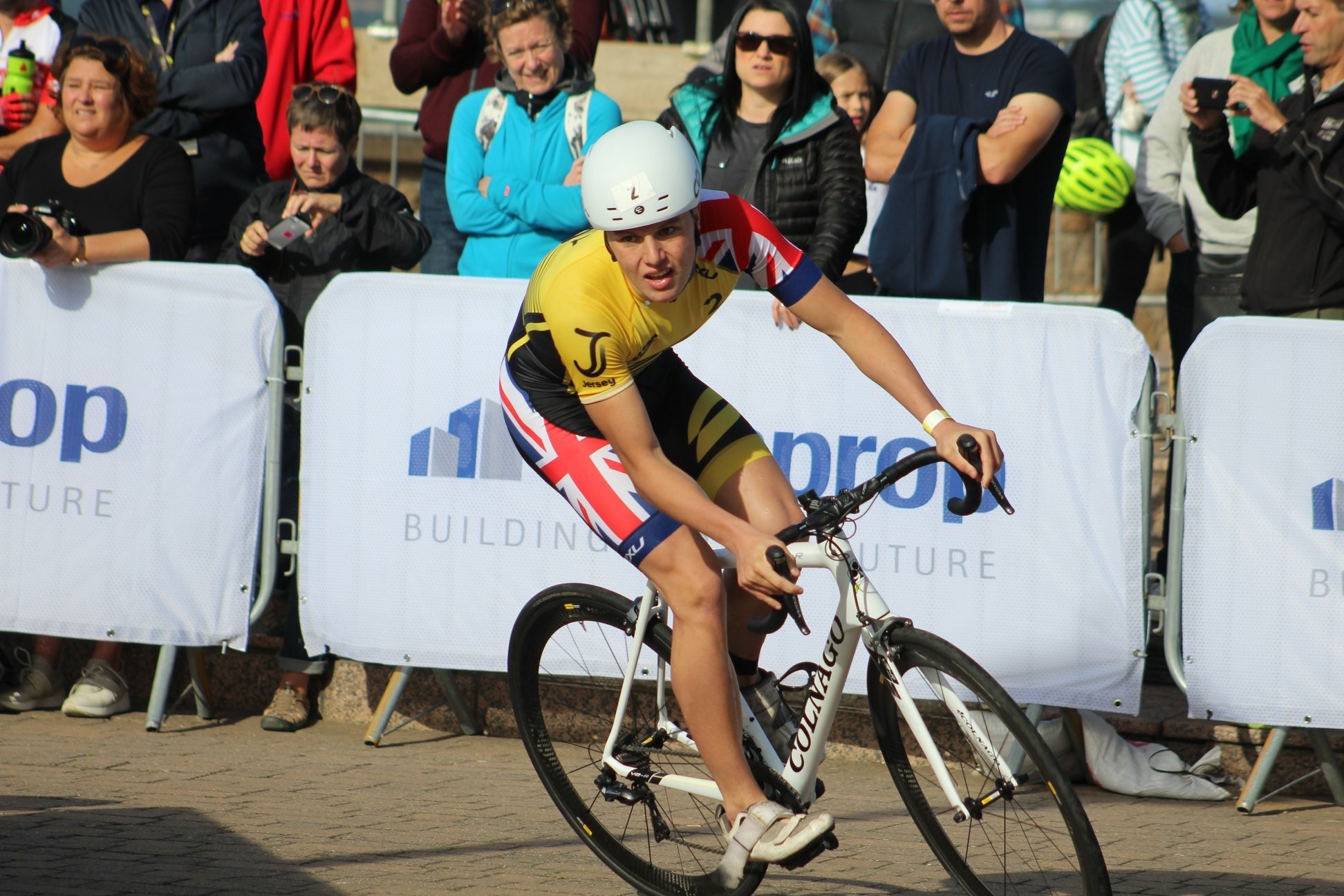 I felt strong and was putting time into the rest of the field by my self. I managed to get around a 15 second lead coming in T2 and that was quite a big lead for the distance we had been racing. 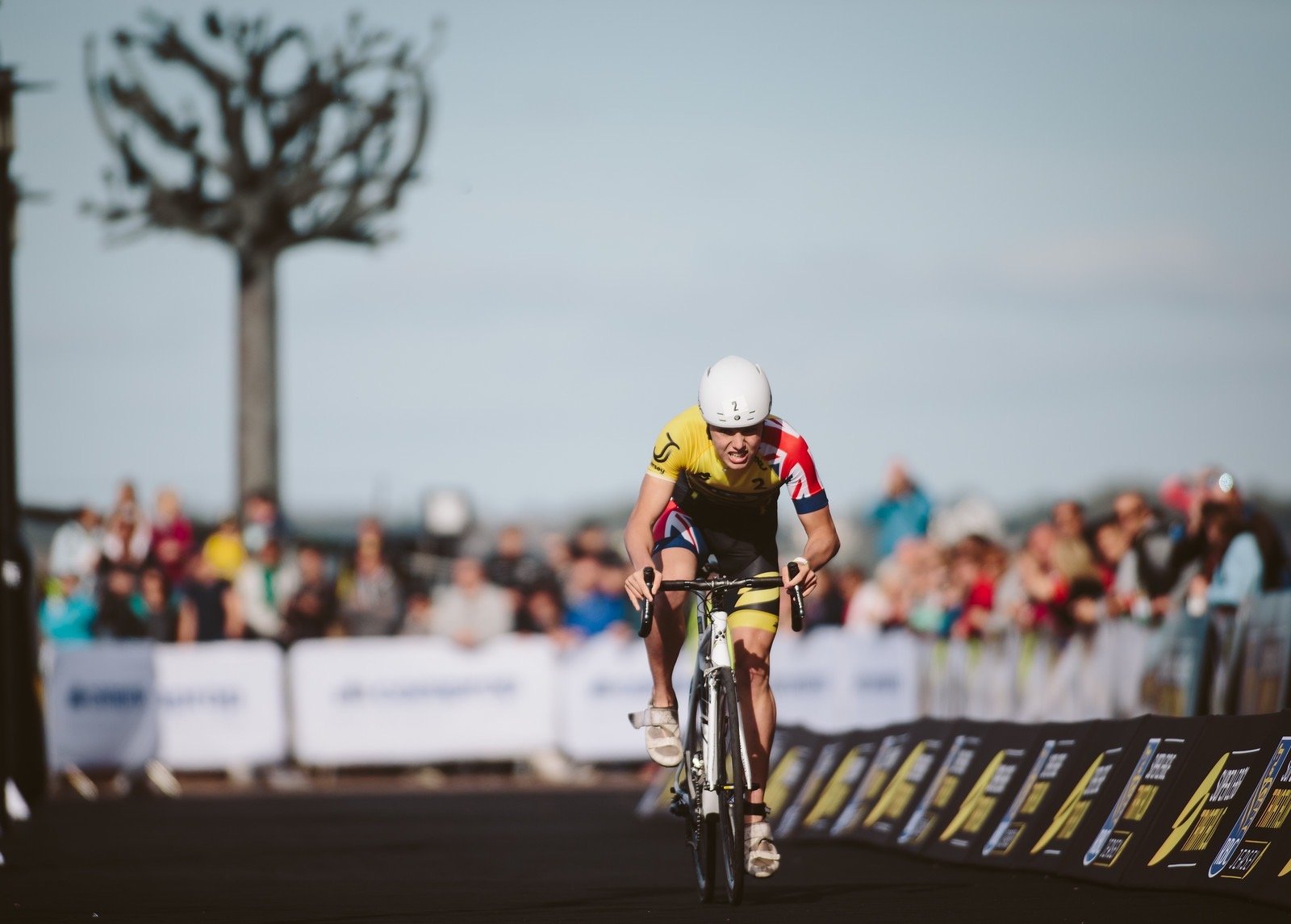 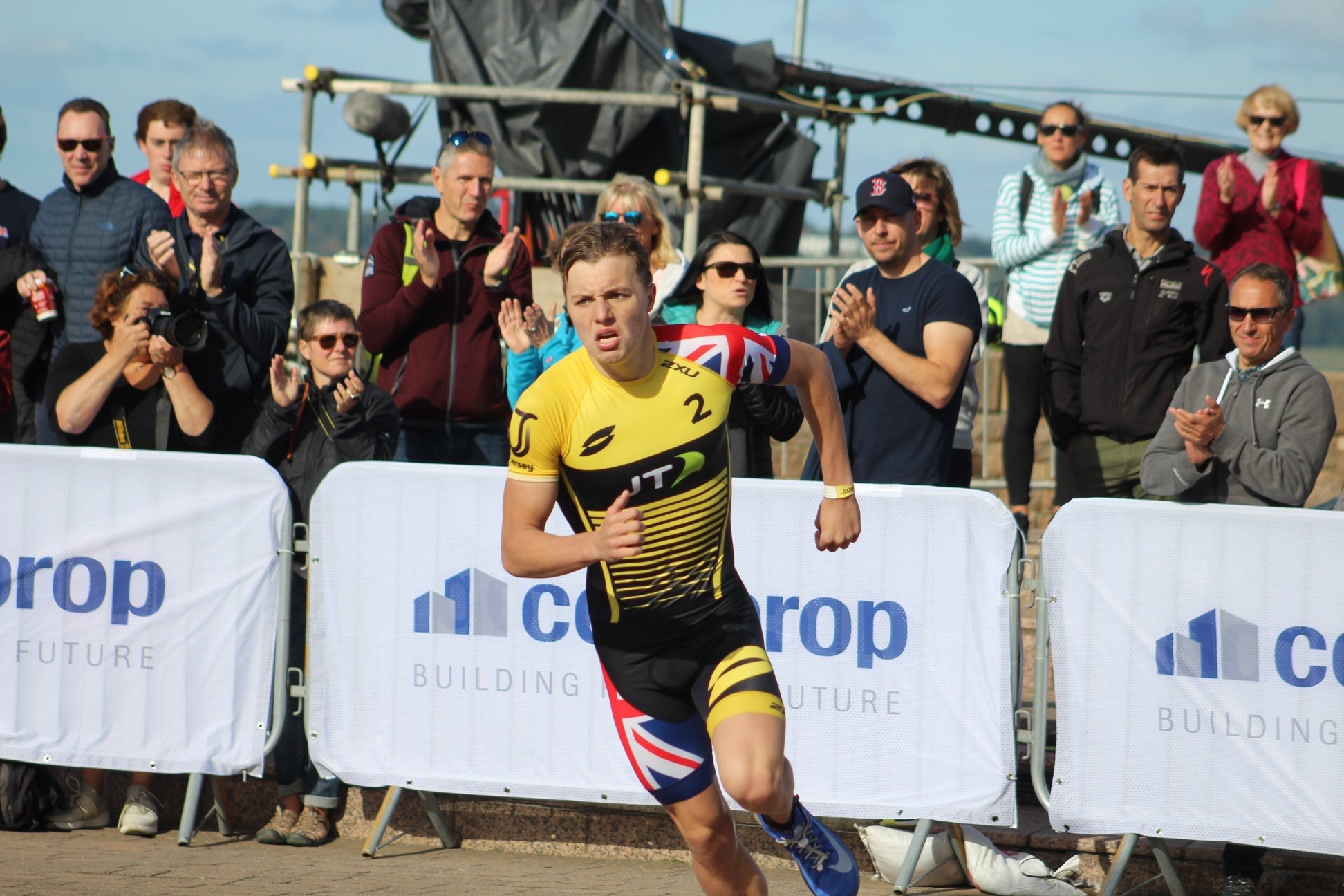 I then held everyone off on the run with time to spare to be able jog into the finish and celebrate the win. I was really happy with my performance and to finish the season with a win. I had felt strong throughout the race. I had put that much effort in on the bike I was determined to not let the win slip through my fingers going into the run. There is a certain comraderie amongst my fellow triathletes and we are all good friends, but I was delighted to share the podium with my Scottish freind Cameron Main (2) and my fellow North West academy triathlete Ollie Makinson (3). 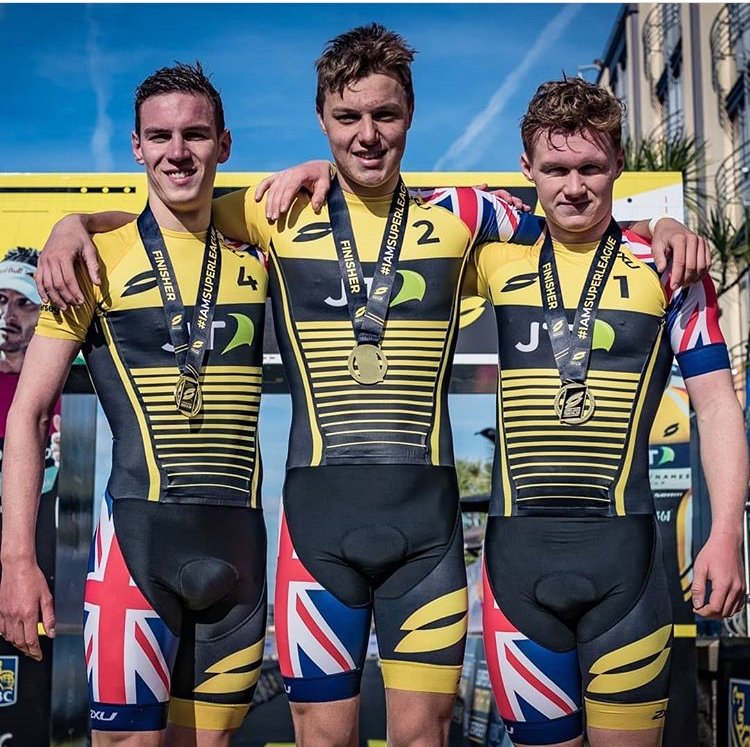 I will now have have a few weeks off and will put my feet up and get back to my studies and Xbox. I am aiming to return to training in late October with a Swim training camp in Tenerife. On reflection I have been happy with my season. I have had some setbacks but I have come through them. I have learnt a lot and I have developed as an athlete. This has been a big season coming in as a Junior and from racing at Super Sprint last season as a Youth to Sprint distance this season. I will remain a Junior until 2020. I have really enjoyed it and I will be looking forward to the 2019 season.

If I can just say a big thank you to the people I have around me. My parents, friends and family for their ever ending support, my coaches for allowing me to do it my way and supporting me as a triathlete.

My sponsors for their continued support. AquaSphere who have provided me with my trisuit and wetsuits which have done the business, Windwave/Colnago for their continued support with the bike. Cycle Addicts, Rochdale (Dave) for providing me with mechanical support and keeping me in the saddle, often at a last minutes notice. Pedal Potential, SportsAid and Kingsland Drinks. Thanks for making this season possible. I hope I have done you proud.